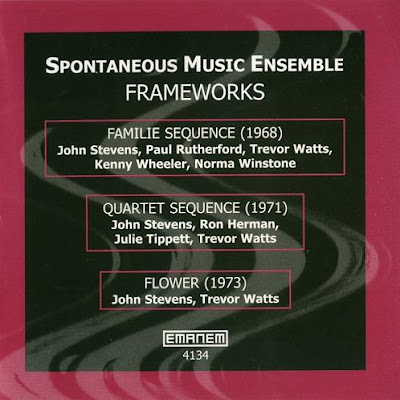 
John Stevens was never satisfied. After coming up with a unique, viable and highly influential method of group improvisation in the middle of 1967 (usually referred to as 'SME Music'), he decided to introduce other elements, most notably the Click Piece and the Sustained Piece which became the most extreme of his pieces designed to help people into group improvising. These, and other such concepts, began to be used in the music of the Spontaneous Music Ensemble (SME), as can be heard on this CD.

Another change occurring early in 1968 was that Trevor Watts rejoined the SME, after a year away from the group. He then stayed until 1976, but has always maintained that it wasn’t really his sort of music, as can be ascertained by his more overtly rhythmic and lyrical work before and after, as well as in his free jazz group Amalgam which co-existed with this SME period. However, it must be said that his work with the SME is superb – but then, he is a superlative (and much underrated) musician.

The first nine minutes comprise the loose theme which was heavily inspired by Gagaku (Japanese court music). This leads to a group improvisation which is interrupted at one point by a short section in which everyone plays glissandi together. Then come short Sustained and Click Pieces which in turn lead to another free improvisation which is capped off by looser versions of Sustained and Click. The overall sequence is unlike any other on record, although there are sections similar to other SME performances.

By the start of 1969, the SME had evolved to the line-up of Stevens, Watts, Johnny Dyani and Maggie Nicols with Wheeler added at times. This was followed by an unrecorded quartet with Mongezi Feza instead of Nicols and Wheeler. 1970 saw the inclusion of several more jazz-aligned musicians into the SME, then for several months in 1971 there was the quartet of Stevens, Watts, Julie Tippett and Ron Herman, which some listeners regard as their favourite SME line-up. (This band has a special place for me, since one of their concerts turned me on to the world of free improvisation.)

The QUARTET SEQUENCE heard here is somewhat similar to their masterpiece BIRDS OF A FEATHER which was recorded a few months later. One aspect of this quartet’s music was the reintroduction of free jazz elements into the SME group improvising. Thus the opening section is influenced by the trio of Albert Ayler, Gary Peacock and Sunny Murray – one of the major influences on the SME group music. The second section is more like SME group music, though it does contain repetitive elements. The third section is like a very emotional Ayler ballad. This is followed by a Click Piece and a Sustained Piece.

Perhaps the most satisfying aspect of this quartet is the amazing interplay between saxophone and voice. Prior to this, Julie Tippett had been a successful pop singer (using her maiden name), but had become disillusioned with that world, and had decided to find something else that was more spiritually satisfying to her. Ron Herman was one of numerous young musicians discovered and encouraged by John Stevens. He played with the SME for a few years, but died at a tragically young age. Stevens can be heard using a glockenspiel in addition to his evolving small drums and cymbals kit that is heard throughout this CD.

For the next couple of years, the SME was basically just Stevens and Watts, with other people added on an ad hoc basis. During most of 1972 and 1973, the duo SME performances were very austere, concentrating on performances of the hyper-minimalist piece FLOWER, which is superficially similar to the Click Piece. Most of Stevens' pieces were designed to open up into freedom - after over six minutes of apparently mechanical playing, the version heard here changes into some emotionally charged free improvisation. This encapsulates the way they came out of their austere period late in 1973, culminating in the magnificent performances collected on FACE TO FACE (Emanem 4003).