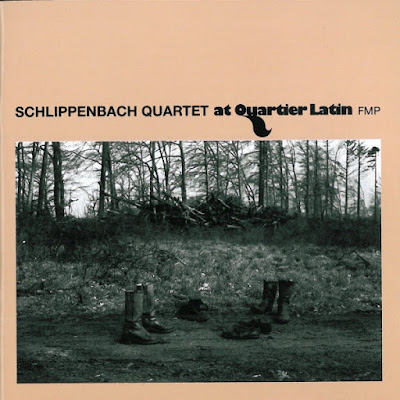 Released as part of the limited edition box FMP im Rückblick—in Retrospect (1969 - 2010), this recording by pianist Alexander von Schlippenbach's Quartet, At Quartier Latin, is an incomparable time capsule that documents a crucial period in European improvisation and the development of today's jazz luminaries.

Available separately from the 12-CD box, this disc brings together two live recordings—originally released as The Hidden Peak (FMP, 1977) and Three Nails Left (FMP, 1975)—featuring Schlippenbach's trio, which was regularly expanded in the 1970s to include bassist Peter Kowald. The most recent re-release by this quartet was Hunting The Snake (Unheard Music Series/Atavistic, 2000).


Schlippenbach began improvising in small ensembles before establishing Globe Unity Orchestra in 1966. But, it has been his work in trio and quartet that has endured for more than forty years. With his collaborators—saxophonist Evan Parker and percussionist Paul Lovens—Schlippenbach has created a model for modern improvising pianists such as Pandelis Karayorgis and Matthew Shipp.

These two recordings document two live, 60-minute sets which were edited for their original release. Piecing together fragments of longer improvisations keeps these nine tracks constantly flowing. Of note here is the genesis of the dynamic nature of the ensemble's energy jazz. They display their ability to create this tension (though not through noise) that is juggled, maintained, and nurtured through the interaction of players. The four keep this musical ball aloft for the duration by adding a pulse or trinkle of notes. Parker's signature extended technique, though not as polished then, acts as a fire-starter. Lovens and Kowald are content to turn on, then off their collective intensities. Likewise, Schlippenbach sits silent in parts, while jumping in others with hammered clusters of notes to power this process.
Posted by Zen Archer at 11:51:00 PM