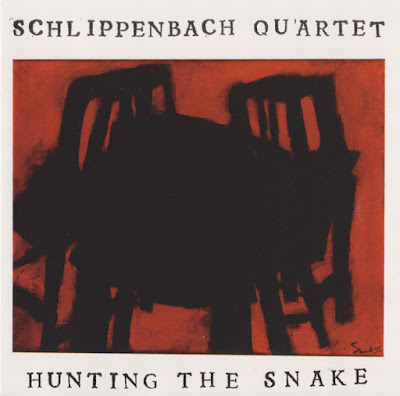 The material on Hunting the Snake -- four lengthy improvisations, each in the 20-minute range -- comes from a live 1975 radio performance but was not released until 2000. It features all three members of the long-running Schlippenbach Trio (pianist Alexander von Schlippenbach, saxophonist Evan Parker, and percussionist Paul Lovens) along with Peter Kowald on bass. The music here is dense, kinetic, atonal, and often harsh, but while not easy listening, this album is not entirely remote or inaccessible, either. The group's playing is very physical and energetic, and though it is recognizably distinct from most American free jazz, the jazz roots are, at this point, still readily discernible. The real interest comes in listening to the quartet's interplay, which is less refined than on some of the Schlippenbach Trio's later work, but which has a certain ragged cohesiveness and charm of its own. Parker's scraping saxophone, Lovens' junk-pile percussion, Kowald's feverish bowing, and Schlippenbach's atonal piano clusters contribute equally to the music's flow -- there isn't a real separation of "lead" vs. "rhythm" instruments during most of the album. Occasionally, however, Parker steps out on his own and lets loose with an extended high-pitched squall, as he does on the standout title track; these abrasive solo moments are especially interesting (or hard to listen to, depending on your take). Its near-80-minute running time is exhausting, but Hunting the Snake is worth tackling in more manageable doses, as it continues to sound daring and alive more than 25 years after its creation.
Posted by Zen Archer at 11:45:00 PM