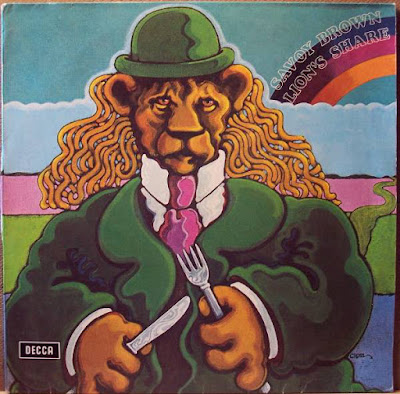 
While it can be safely stated that the band's previous effort Hellbound Train remains the pinnacle of the Dave Walker era and a strong link in the Savoy Brown discography, Lion's Share nonetheless follows up with some solid numbers of its own, many of which fall back comfortably to that fundamentalist blues sensibility which, for the most part, had been sitting on the backburner since the widely adored Chris Youlden set out for a solo career some years earlier.

The songs played on Lion's Share are a nice melting pot of covers and original compositions as usual, with Walker himself even making an admirable attempt at writing what he sings in the fun Chuck Berry style rocker "Denim Demon". The three Simmonds tunes here are also a safe bet as usual, with "Second Try" in particular being a steadfast highlight of the A-side with some fine fretwork thrown over a dreary blues shuffle. The keyboard-heavy "So Tired" busts the second side wide open with a disjointed ramble on the rigors of touring. Later on, the femme fatale ballad "Love Me Please" slithers along at a midnight creeper's pace, but agreeably so. Regarding the multitude of covers in attendance, the album's opener "Shot in the Head" is borrowed from Haffey's Whiskey Sour and is re-adapted nicely for the body of work at hand. There's also an infectious romp through the Chester Burnett/Willie Dixon composition "Howling For My Darling" and Little Walter's "Hate to See You Go" knocks around furiously, closing off the show as impeccably as it began.

Shortly after the album's release, the band lost yet another important member with Dave Walker jumping ship over to Fleetwood Mac for their Penguin album before his dismissal from that project as well. Consequentially, Lion's Share would punctuate the end of yet another phase in the band's timeline. However despite all of the incessant line-up changes and resulting creative rebirths throughout the years, the bottom line to remember here is that since its inception Savoy Brown has been and will essentially always be the Kim Simmonds Show. Even at the expense of critical favor Simmonds has kept the band running unapologetically in the face of changing trends and declining public interest, maintaining such a deathgrip on the blues that most every album following this one can and should only be reserved for the diehards. Although it didn't become a best seller or age terribly well by today's standards, ultimately Lion's Share serves if nothing else as a mile marker for a British blues band coming off a brief flirtation with commercial success, refocusing on what they always did best and to hell with the critics.
Posted by Zen Archer at 12:24:00 AM