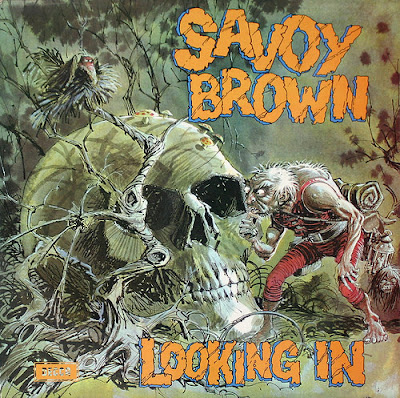 
In 1970, life was pretty good for Savoy Brown. They had just produced Raw Sienna, their finest album to date, and were building a name and rabid fanbase for themselves, particularly in America. Then, without warning, lead singer Chris Youlden decides to drop out. At the time, the story given was that he was tired of standing on stage, waiting for Kim Simmonds to finish his lengthy solos, and so decided to strike out on his own. In any case, Savoy Brown was suddenly left without a lead vocalist. A creative entity often produces it's best work in times of crisis, so Kim and Co. turned on the creative juices, Lonesome Dave took over the lead vocals (sounding very much like Chris in some of the numbers), and Savoy Brown produced Looking In, their strongest and most mature work ever. The brass and orchestration of Raw Sienna was shelved in favor of lengthy guitar-and-percussion based works of deep introspection. There is a heavy jazz improvisational feel to several tracks, particularly "Sunday Night" and that fabulous live staple, "Leaving Again". The latter number includes some of Kim's most eloquent guitar work of his entire 30+ year career. "Gypsy" and "Romanoff" are brief instrumentals that should remind the listener of Fleetwood Mac's "Oh, Well (Part II) with it's heaven and hell journey of soul searching. "Poor Girl" and the title track deliver the solid mule kick of hard rock that Dave, Tone, and Roger would use to such great effect in Foghat. (Tone even wrote the excellent "Poor Girl;" pretty good effort for a sharp-dressing bass player!) But, the album's most astonishing number is "Money Can't Save Your Soul," approximately four minutes of slow-burning cold fire. Kim has periodically returned to the themes of money and success in his lyrics; nowhere more eloquently than in this piano and conga-driven wonder. And as a vocalist, Lonesome Dave gives his finest, most passionate performance ever. (The doubletracked vocal gives an archival effect that ensures this is a performance for the ages). Having climbed a musical Everest, there was nothing the band could do or say after this album that would not be anticlimatic. So, they fractured one fantastic band and came up with two excellent ones: Dave, Roger, and Tone formed Foghat with ex-Shakey Vick guitarist Rod Price; while Kim reformed Savoy Brown and looked for new worlds to conquer. But, to paraphrase Winston Churchill, this was truly Savoy Brown's finest hour.
Posted by Zen Archer at 11:59:00 PM