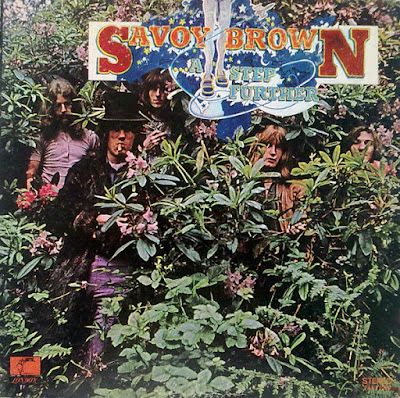 Studio
01. Made Up My Mind
02. Waiting In The Bamboo Grove
03. Life's One Act Play
04. I'm Tired
05. Where Am I
Live
06. Savoy Brown Boogie Including
I Feel So Good
Whole Lotta Shakin Goin On
Little Queenie
Purple Haze
Hernando's Hideaway

Side Two was recorded live at The Cooks Ferry Inn, Edmonton, London on Monday 12 May 1969


A Step Further by Savoy Brown was released in August, 1969. I purchased this album, on vinyl, on its original release and do no think a year has gone by when I do not listen to A Step Further. I've owned this masterpiece on vinyl, 8-track, cassette, and CD. It is just that good! By the end of this review you might ask yourself, is this a Savoy Brown review? Let me explain.

Despite its many incarnations the Savoy Brown of our mind is the band fronted by singer, Chris Youlden, who is doing who knows what now a days. (I think he made a foray into cabaret singing, God forbid.) Of the 4 Savoy Brown releases featuring Mr. Youlden, A Step Further, is the best of the lot. He penned much of the music on all 4 albums.

The real gift of A Step Further is Youlden's bluesy, soulful voice. This is not to downplay the band's overall genius, Kim Simmonds and the late Lonesome Dave Peverett's guitar playing are exquisite, but without Youlden's vocals, we are only left with an exceptional blues and boogie band.

Just listen to the opening track, MADE UP MY MIND. What you are hearing is Chris Youlden in all his raw blues power, captured even on the album's cover, Youlden cigar in mouth, beat up top hat on head. A little later on one is treated to the classic British Blues tune, I'M TIRED. Youlden lyrically is telling is he is going to go his own way.

The follow up albums to A Step Further, Raw Sienna, and Looking In, live in the shadow of this much better album. Youlden left the band after Raw Sienna, and the classic Savoy Brown line-up, while still fronted by founder Kim Simmonds, melted away after Looking In and became Foghat.