Savoy Brown
1968
Getting To The Point 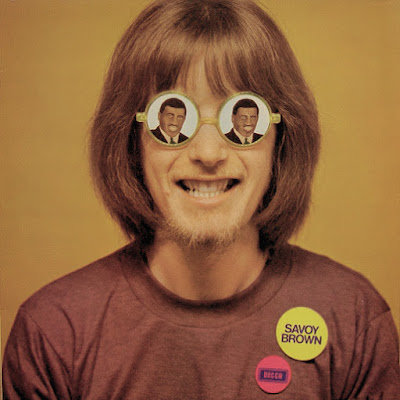 
Since time immemorial musical aggregations have changed personnel with sometimes alarming regularity, but few if any have managed as many alterations in as relatively as short a period as that of the two first 'Savoy Brown' albums, debut album 'Shake Down' in September 1967 and follow up 'Getting to the Point' in July 1968. (Making 'Spinal Tap' look positively stable. ) The band changed lead singer's; 'Lonesome' Dave Preverett came in on slide guitar to replace second guitarist Martin Stone; two bass guitarists and drummers had been and gone before they settled on the pairing of Rivers Jobe on bass and Roger Earle on the drums. (Even then Jobe had departed before the next album was released.) This only left bandleader and guitarist Kim Simmonds and piano player Bob Hall, who was never really a full time member of the band, preferring to keep his options open to be available for his very lucrative session work, from the band that recorded the debut album.

But if it was Kim Simmonds' quest to find the perfect British Blues and Boogie Band, one listen to this album will leave you in no doubt that he was already coming very close.

Although this lineup of 'Savoy Brown' had only been together a matter of days, the Decca Record Company put them in the studio with legendary producer Mike Vernon (Fleetwood Mac, John Mayall, etc) to record this classic album.

Right from the get go, when the band bump and grind their way into opener "Flood in Houston", you know that you are listening to something very special. The band has a chemistry that makes you feel they have been together for a lifetime. Youlden's voice on this and the next three Savoy Brown albums put him up there with all of the great blues singers (many comparing him favorably with the great Bobby Bland). The guitar playing of Peverett and Simmonds was the equal of anything Clapton or Green were doing at the time. Jobe and Earl held down a rock solid backbone, whilst Hall's piano work shows why he was held in such high regard by his contemporary musicians.

Of the nine tracks on the original release there are six band written songs and three covers, but such is the high standard of the songwriting, it is hard to tell which is which.

The music is probably best summed up by the eight minute long "You need Love", the old Willie Dixon chestnut, which rushes off at a brisk twelve bar, whilst Youlden explains to the object of his desires why she needs his affections, before Simmonds takes over with a blistering guitar solo, giving way to a thundering bass section from Jobe. A pulsating drum solo from Earl leads us into a `dueling banjo style' guitar battle between Simmonds and Peverett. Then the whole band come back to bring the song to a fitting climax.

For the CD release three extra tracks have been added onto the original release. A cover of Lane's "Walking by myself " made famous on Gary Moore's album "Blues Alive" and now a staple of Pattaya's own Pop Jorilia's band "Satin Soul". A wonderful Youlden original "Taste and Try, before you Buy", which could be Hendrix at his sauciest, and a great Simmonds blues jam "Someday People". So not only are you getting great music, you get great value for money too.

Kim Simmonds still leads Savoy Brown today (probably on lineup number 467 by now). Dave Peverett, Roger Earl with Jobe's replacement Tone Stevens went and left Savoy Brown in 1970 to find superstardom in "Foghat". Sadly, over the years Chris Youlden has released three patchy solo albums to no great avail. But whilst they were together, these boys could really play.
Mott the Dog.
Posted by Zen Archer at 11:18:00 PM