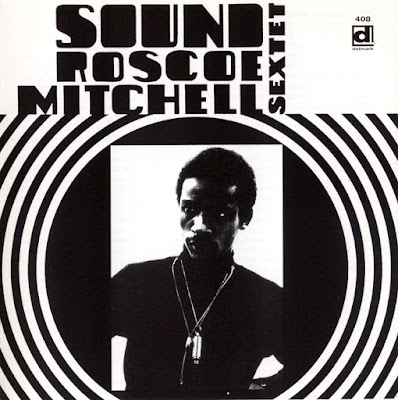 Sound, Roscoe Mitchell's debut as a leader, was an early free jazz landmark and an enormously groundbreaking album in many respects. Historically, it marked the very first time that members of Chicago's seminal AACM community appeared on record; it also showcased the early chemistry between future Art Ensemble of Chicago members Mitchell, Lester Bowie, and Malachi Favors. Arrangement-wise, it employed a number of instruments largely foreign to avant-garde jazz -- not just cello and clarinet, but the AEC's notorious "little instruments," like recorder, whistle, harmonica, and assorted small percussion devices (gourds, maracas, bells, etc.), heard to best effect on the playful "Little Suite." Structurally, Sound heralded a whole new approach to free improvisation; where most previous free jazz prized an unrelenting fever pitch of emotion, Sound was full of wide-open spaces between instruments, an agreeably rambling pace in between the high-energy climaxes, and a more abstract quality to its solos. Steady rhythmic pulses were mostly discarded in favor of collective, spontaneous dialogues and novel textures (especially with the less orthodox instruments, which had tremendous potential for flat-out weird noises). Simply put, it's an exploration of pure sound. It didn't so much break the rules as ignore them and make up its own, allowing the musicians' imaginations to run wild (which is why it still sounds fresh today). Sound's concepts of texture, space, and interaction would shortly be expanded upon in classic recordings by Anthony Braxton, Muhal Richard Abrams, the Art Ensemble of Chicago, and others; the repercussions from its expansion of free jazz's tonal and emotional palettes are still being felt.

Tackling a cultural watermark like “Sound” is akin to distilling the essence of “Human, All Too Human” into a few crass paragraphs– yes, I’m aware that sounds more pretentious than a John Cage worshiper on peyote with five people giving him/her their undivided attention, but I couldn’t think of a more down-to-earth analogy… my apologies. Awright, fuck it, I’m gonna plow forward even though I find this one of the more daunting tasks I’ve undertaken here...

Then again, who really has tapped into the vein of free jazz using mere words? Lester Bangs at his Romilar D-guzzlin’ best? Nah, he tended to spend as much time rambling on about himself– as entertaining as he was– as the music itself. The academically-inclined yo-yo’s at Down Beat? Need I even answer that? Truth is, verbiage will never accurately convey the organized chaos constructed by Roscoe Mitchell, Alto Saxman Extraordanaire, and his soon-to-be fellow members of the Art Ensemble of Chicago (Lester Bowie, Maurice McIntyre, Malachi Favors, Alvin Fielder and Lester Lashley). This is music so fulla paradoxes you’ll soon find yer head swimming (and plenty o’ other body parts as well)– beautiful/hideous, playful/terrifying, harmonious/dissonant… I could list ‘em for pages (but I won’t). Instead, here’s a quickie lowdown on two tracks (there’s only five, two of which are alternate takes):

“Sound 1,” is a shining example of what can happen when musicians with extra-sensory chemistry and boundless creativity are unshackled from all known conventional thought. Beginning with some atonal, yet thematic shrieks from Mitchell and Bowie (tenor sax), this 27 minute epic quickly shifts to a less serious tone with Lashley’s entrance: Realizing that trombones create a damn good fart noise, he lingers in infantile territory for a while before being joined in the fun by Mitchell and Bowie. The result is the kinda bizarre interplay you’d tend to associate with Carl Stalling– particularly if he was scoring a scene where Wile E. goes SPLAT!! And then there’s Lester Lashley’s cello “playing.” The Godz had to’ve been spinning this sucker day ‘n’ night, as they are the only artists I can think of who mauled a bowed instrument quite like Les… you shouldn’t feel ashamed if you at first mistake it for a cat being tortured.

“The Little Suite,” also sounds a lot like cartoon music– a rollicking, ever-morphing piece resembling a joyous, inside joke-filled conversation between cello, recorder, flugelhorn and um… gourds. When you start to believe you’ve wrapped your head around what they’ve set out to accomplish… you’re wrong. Ringing bells punctuating the dialog unexpectedly give way to a cacophony of squawking saxes that’d make Keiji Haino wince. Frank “Money in the Bank” Zappa borrowed more’n a few of the ideas featured here (check out “Studio Tan” sometime).
Posted by Zen Archer at 2:35:00 AM