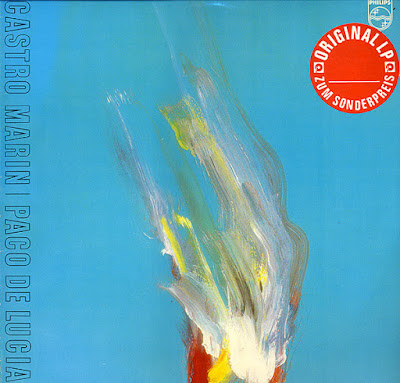 This collection includes guitar duets and some ensemble work of moderate size, well into the phase when Paco was innovating quite a lot, integrating some jazz and pop elements. Unlike most innovators in flamenco, however, he still managed to retain the respect of serious critics, such as Robin Tottin (Song of the Outcasts: An Introduction to Flamenco (2003)).

Of course, there are critics of every art form who will never be satisfied unless the most conservative norms imaginable are followed. These people have their own function, but not as arbiters of deep musical value. Such value is found in Paco. This is beautiful music. However, don't pick up this album, or anything by Paco made more than a few years into his career, thinking that you're getting the basic idea of flamenco. Like anything Iberian, flamenco is in its essence conservative; one can listen to Beethoven without knowing Hayden and Mozart, but to get much out of Paco, you have to know where he came from.
Posted by Zen Archer at 4:36:00 AM