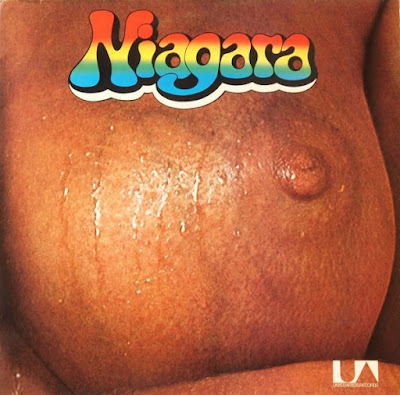 
Niaqara one gets dumped into the Krautrock catalog which is unfortunate since the band's self-titled 1970 debut actually has more of a world music feel than the cold, synthetic moves you'd associated with traditional Krautrock.  I'm guessing the cross-categorization has to do with the fact the band called Munich home (even though it's front man was Austrian and the line-up was international) and they played non-commercial material

Niagra's front man was drummer Klaus Weiss.  In the early 1970s he relocated to Munich and decided to explore opportunities to create what was in effect a drum orchestra.  Looking around the city's then -vibrant music community he ended up recruiting a multinational collective of similarly inclined percussionist, including American percussionist Cotch Blackmon, British drummer Keith Forsey, Venezuelan Juan Romero, and German drummer Udo Lindenberg .  The group somehow attracted the attention of United Artists which signed them to a contract, releasing the cleverly-titled "Niagara" in 1971.  Self-produced, the collection featured two Weiss-penned extended instrumentals.  The entire focus was on drums and percussion - no vocals and no other instrumentation.  Call it a drummer's dream come true, though for others it was probably less of a treat.