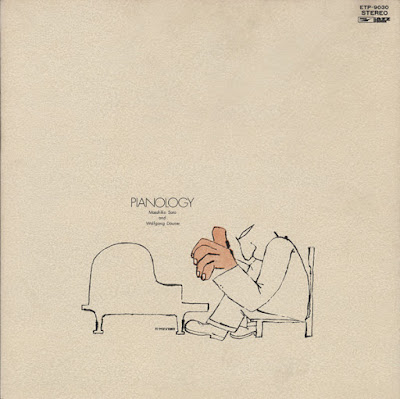 Masahiko Satoh’s fourth album is a duet with German pianist and composer Wolfgang Dauner. Dauner is one of very early European avant-garde jazz pianists, and he recorded the first free jazz album in Germany back in 1964. Dauner played with Eberhard Weber and Jean-Luc Ponty, and in the late 60s, he experimented with choral music. Being a passionate innovator and experimenter, in 1970 he discovered electronic devices and started using them in his music. He experimented with ring-modulated Hohner clavinets and pianos and recorded several albums for ECM. During his Japanese tour in spring 1971, he met one of the most advanced Japanese pianists of that time, Masahiko Satoh.

The five compositions on this album were recorded in Tokyo in March 1971, but were not released until that autumn. It’s interesting that a few months later, Masahiko Satoh will record and release his best known, and in some sense, legendary album “ Amalgamation” - an eclectic mix of musical genres and sounds, which was probably influenced by his earlier collaboration with Dauner.
Posted by Zen Archer at 11:48:00 PM