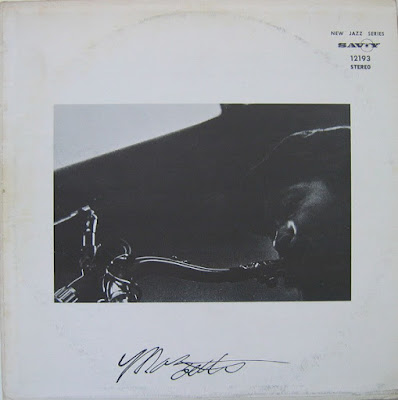 
This is quite a notable recording. One that has received praise from both Destination: Out, as well as in Thurston Moore's top ten (14) Free Jazz Underground Recordings. But to be honest, why isn't Marzette Watts more popular. This is a man who had creativity flowing all over his body. A man who wrote film scores, created his own films, painted in the vein of the Abstract Expressionists, and created truly unique music.

The Marzette Watts Ensemble is a meditative, artistic vision. Not a wall of sounds assaulting the listener, but a metaphysical journey. Free, in the moment, and inspiring visuals of shapes and colors. The Ornette Coleman standard, Lonely Woman, hits the spot. Mostly because of the vocals provided by Patty Waters adds even more of a haunted quality to the song. And after the first verse, Marty Cook and Marzette Watts duo like it's the last piece of music they'll ever create. Maybe, that's what making music was like back then.
Posted by Zen Archer at 8:25:00 PM