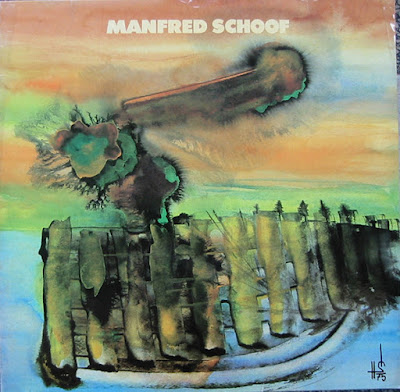 Here is the next item in my german series. Early Free Jazz from Manfred Schoof and his Sextet.
By the way - I don't think that I am a specialist in this special department of music. I am interested in creative music - primarly coming from the Jazz heritage - and as I live in close to Germany it makes sense to me to try to discover also this tradition. But my (musical) interests are much more global . So - don't be surprised or disappointed if there will be music from other parts of our planet. Off course you won't be...

Manfred Schoof grew up perfecting his innovative jazz style, often practicing on either his jazz trumpet or his flügelhorn. By the time he reached high school, Schoof was composing his own arrangements. In 1955, Schoof decided to purse a musical career, enrolling in the Music Academy (Musikakademie) at Kassel. After studying and performing there for three years, he moved to further his studies at the Cologne Musikhochschule. While there, Schoof took a jazz class by Kurt Edelhagen, a West German bandleader who also had his own radio program. Schoof and Edelhagen established a musical connection, with the pupil contributing to the teacher's Radio Big Band radio show. At the same time, Schoof began touring with Gunter Hampel. In 1965, Schoof created a free jazz quintet with Gerd Dudek and Alex Von Schlippenbach. It would be the foundation for another band he formed in 1969, the Manfred Schoof Orchestra. The group toured throughout Germany and Europe, featuring Evan Parker and Irène Schweizer, among others. In 1969, he joined the George Russell Orchestra and stayed with the band until 1971. Throughout the next two decades, Schoof expanded his musical horizons, recording and performing with several groups, including Global Unity Orchestra and Jasper Van't Hof. He also began composing classical music pieces, often composing them for the Berlin Philharmonic.
Posted by Zen Archer at 2:17:00 AM