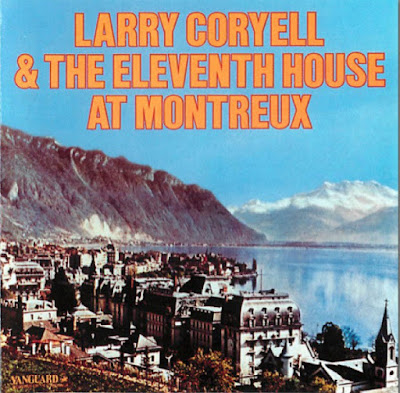 Recorded at the Montreaux Jazz and Pop Festival, Montreaux, Switzerland on July 4, 1974

As a guise of an intro, the Montreux Festival of 1974 announcer remembers LC's previous passage on the shores of Leman Lake three years before (in 71) and documented with the Fairyland album, but here he comes with The Eleventh House. Most likely, when The Eleventh House recorded Aspects in 76, they had no idea this would be their last album, so Vanguard issued the tapes of their 74 festival as a live album, some four years after the recording took place, out of contractual obligations. And are we happy he did too. The album stands chronologically between Introducing and Level One, with trumpetist Randy Brecker already gone, but bassist Trifan is still there. While recorded in the festival, Weiss is still producing the album, and the label chose a Montreux city shot for an artwork.
After the opening acoustic guitar intro, the group plunges into wild fusion with the Mouzon-penned Tamari that was not studio recorded back then, but then again, it is the case for most of this concert's tracks. So in sort, this album could almost be seen as another full-fledged EH album. Indeed only Joyride (extended by three minutes) appears on another disc, but the "new" tracks are pure gems, such as the Mandel- penned Rasputin or EH Blues, both fitting perfectly the EH mould. Only Rainmaker is less-enthralling Rainmaker might seem a lesser track, but to actually take it into consideration as such would be nitpicking.

What an excellent way to close the three year bracket into Coryell's career called Eleventh house, even if this album comes well over two years after and sounds like a contractual wrapping-up. Nevertheless this album is as essential as the three studio albums and one that serious progheads can't afford to overlook if he's a serious Coryell fan.
Posted by Zen Archer at 1:19:00 AM