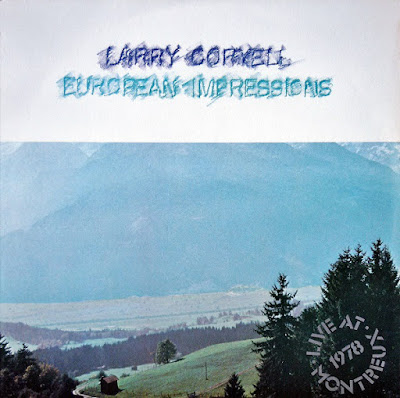 Side one recorded live at the Montreux Jazz Festival, Montreux, Switzerland by the Mountain Studio on July 23, 1978.

Side two recorded at Soundmixers, New York City on August 17, 1978.

This album is yet another acoustic guitar album that LC has gotten us used to in the late 70's, and here half the record is a recording of his third appearance at the Montreux festival in the summer of 78. The first time around (71), he had come with a rock group, the second time around (74), he was with his Eleventh House group, and this time around, he came as a solo acoustic guitarist, again reflecting well what he was up to at the time. With an alpine artwork and a long-haired Larry hunched over his Ovation guitar on the back cover, this album is an unaccompanied straight acoustic guitar album, the typical stuff LC was into in the late 70's, somewhere between Reinhardt and acoustic blues-jazz. Better investigate Lion & Ram album, to see if you could be into this one.
Posted by Zen Archer at 1:13:00 AM