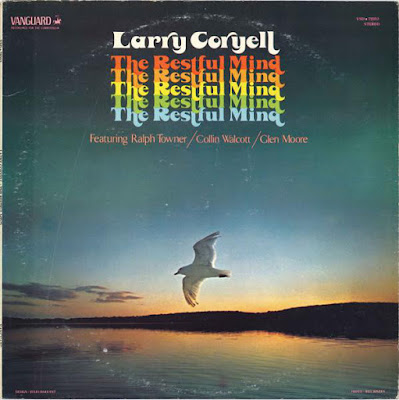 This album is a bit of an oddity in Larry Coryell's discography of the 70's. First it was recorded during the life of The Eleventh House, second, this album is almost more of an Oregon album, (if you'll except the LC songwriting) as both Walcott, Moore and Towner are a major part of the album's soul. Well, LC holds as much ties with Oregon (the state he lived part of his life) as the band itself, and with a superb sunset landscape artwork (and an even more stunning inner gatefold), again produced by the in-house chief Danny Weiss, the album is a pure breath of fresh air.

The opening lengthy Indian raga Mettuet 3 gives a good overview of what's to come in the rest of the album. Ann Arbor is more centred around LC, the Oregon members only intervening in the middle section, but the track is a pure gem, unlike its successor, the LC-rearranged Ravel piece Dead Princess, where LC is solo. The flipside opens on another improv of Devisee, this time a Sarabande, but the general feel remains unchanged from the other side of the vinyl. Beit Jim Webb, Julie or the title track, the show is for Larry, but the Oregon members are a stellar supporting cast.

Although I wouldn't call TRM essential by any means, if you choose to investigate the acoustic Coryell, this album and Lion & Ram are the ones to start with.
Posted by Zen Archer at 11:30:00 PM