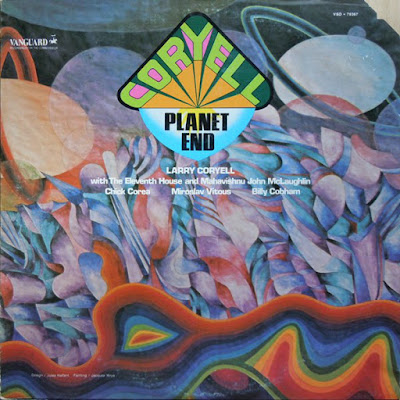 
Again graced with a Jacques Wyrs artwork, this album is a bit of a pot-pourri mixing Eleventh House tracks with some other tracks that seemed to come out of the Spaces sessions (same line-up anyway) and a solo guitar piece.
Indeed the Mouzon-penned Cover Girl could easily come out of Eleventh House's debut album (it could've replaced advantageously Coryell's guitar track Gratitude) with its mid-MO mid-WR feel. The only thing missing is Brecker's trumpet, here replaced by M Lawrence's, but it's simply not the same. Ditto for the Brecker-written Rocks, which would've easily replaced the boring Dream theme on the debut album.

The Vitous-McL-Cobham-Corea tracks are indeed reminiscent of Spaces (the track, more than the album) back from 69. The 11-mins+ Tyrone is a pure scorcher, a torrid piece of electrified jazz (but not really jazz-rock) where everyone surpasses their own boundaries, but at the risk of bordering the cacophony at times, fortunately not often. At times the track is reminiscent of Tony Williams' Lifetime (this is a Larry Young track, after all) as well. The closing title track is also a fine electrified jazz, where unfortunately Cobham does a drum solo, thankfully not long,

The Eyes Of Love could also be coming from Spaces & here, LC plays all the instruments himself. A weird mix of two LC era in one album, Planet End is indeed good enough to get that fourth track, although I am not calling it essential as opposed to EH's debut. Up to your tastes, really!!!
Posted by Zen Archer at 10:33:00 PM