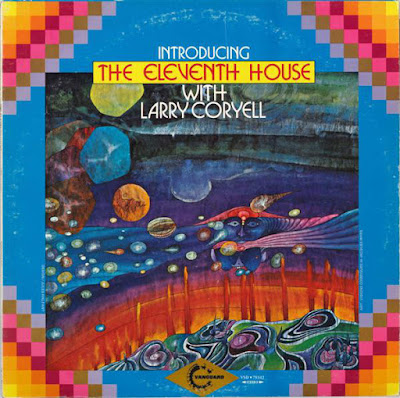 
As the title indicates, this LC's new fusion group, as he thought it was also pertinent to build a JR/F group as McL had (MO), or Zawinul and Shorter (WR), or Corea (RTF). So in came The Eleventh House, with a solid line-up, with powerhouse drummer Alphonse Mouzon, Randy Brecker on trumpet, Mike Mandel on keys and little-known Tritan on bass. Again produced by Vanguard label in-house Danny Weiss (it seems LC only wanted him), this album comes again with a major psychey and spacey artwork from Jacques Wyrs. But as LC was one of the last great jazzman to get his group together (or jump on the bandwagon if you wish), he wouldn't really be as successful either commercially or artistically. This EH project will not be a vehicle for its leader, the way MO would be for McL, as LC will regularly leave space for Alphonse Mouzon and Mike Mandel writing songs (two each on this album). The grouop has its roots in the previous LC solo album Offering.

While this debut album smokes in places, and rocks your wimpy arse to the ground, it also has its share of flaws and fails to really convince completely as did Inner Mounting Flame or Weather Report's debut did. Starting on the ultra fast asc/desc-ending riff of Birdfingers, which resembles a bit MO's first album, Brecker gets the solos for himself. The following Mouzon-penned Funky Waltz is more reminiscent of WR's Mysterious Traveller (same ideal: find a groove and stick to it, soloing away), released the same year, with Brecker's trumpet replacing Shorter's sax. Low-Lee-Tah (I suppose Lolita) is a slow torrid fusion, seemingly crossing early MO and early WR, and it comes out as a pure scorcher. The Mandel-written Adam Smasher should be the pianist's bravery piece, but Brecker again seems to steal the show, with Coryell's wah-wah guitar solo equally impressive. Mandell can't catch his moment in his other track, Joy Ride, and his choice of synth is astonishing for the year (he must've been one of the first to own it), but I was never fond of that sound, which will pollute the later 70's fusion albums.

On the flipside, Yin kicks in open doors, but it's so sweet to get this type of 100 mph track right between MO and WR, RTF being not far away, either. 100% molten lava pouring out of the crater of your speakers, with again the same synth. The Dream theme is a slow and rather uninteresting tune, lacking the energy of its sister tracks. Gratitude is a guitar solo piece that would've been best left out, and saved for solo album. Ism-Ejercico is much reminiscent of Yin and Birdfinger, again finding its influences on the MO/WR axis. The closing Right On (Mouzon-penned) repeats the formula of Funky Waltz with better luck and finesse.

Soooo, aside a weaker passage on the flipside, Eleventh House's debut is a very impressive start and maybe the group's finer moments, even if there will be more. Maybe LC's most
Posted by Zen Archer at 9:55:00 PM