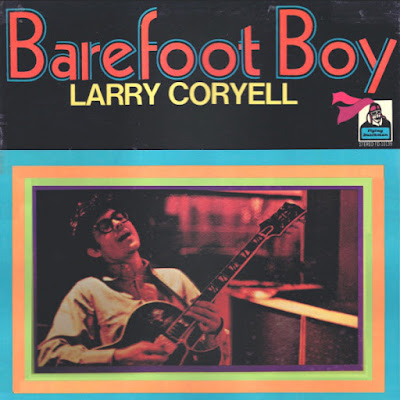 Probably Larry Coryell's most important album outside the Eleventh House efforts, Barefoot Boy is the first truly jazz-rock album of his. Although LC took the Village Gate line-up of Bronson and Wilkinson, he future regular collabs Steve Markus (sax) and his old school friend Mike Mandel (KB) to make a sensational line-up that will make the next few albums' basis. With one of the poorer artwork of his early discography, BB is just three tracks but do they ever smoke, breathing in some cool rapid conga-fuelled rock and swallowing a wild sax and spewing out a torrid incandescent lava flow that will set fire to your speakers if listened to loud, let alone your brain cells.
Indeed the 12-mins Gypsy Queen is a long steady rapid-fire rock beat, but it serves as a base for Markus' absolutely wild sax solo, while Coryell either supports Markus or outdoes him in astounding Hendrix-like solos. The following 8-mins+ Great Escape is a much funkier (but in a very rock way) driven on Bronson's bass, where again LC is pouring his heart into his solo. Somehow the second Traffic line-up (Kwaaku Reebop) is not far away. The flipside is a sidelong extrapolation of The Higher Consciousness, where Markus and Coryell directly take the track into pure Nucleus-like fusion with Mandel pulling the track later in a Coltrane mode, although he won't match Tyner's brilliance, but still manage a good rendition. Too bad the track is plagued with an almost 4 minutes drum solo (Haynes is no Elvin Jones), but once the track resumes, complete madness has taken over the musos

Although LC had made some terrific albums up to this one, they were, shall we say a bit in the Hendrix mode, something that dramatically changes with BB. Well LC had found a stable group and it would be the same line-up to appear on next year's just as superb Offering and the much poorer Real Great Escape, before LC will take Mandel to found The Eleventh House. Possibly LC's crowning achievement, this album is an easy five star.
Posted by Zen Archer at 3:34:00 PM