Larry Coryell
1971
At The Village Gate 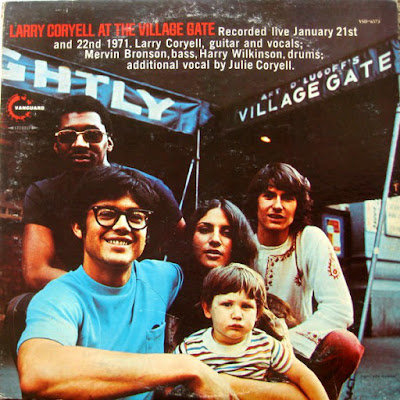 
Although remembered, as a jazz guitarist Larry Coryell is probably the rockiest of them all, since he started and played in rock band from 59 onwards, until by the mid-60's, he was seen in jazz circles. A fan of Hendrix, Cream and more, LC's first album were definitely swaying from jazz to rock, with ex- Coltrane and future Mahavishnu members helping out on his first two real solo albums (Lady Coryell and Spaces), but this album is most definitely in the Hendrix realm, probably very close to what Jimi would've done, had he been given the time to explore jazz. In some ways, this album is John McLaughlin's equivalent of Devotion, with wild rock guitars, hard rocking rythms, but there aren't Larry Young (or anyone else's) organ parts. As usual with many Corryell albums, you'd have a hard time looking at the sober artwork and guess the nature of the music on the disc, but you'll know easily it was recorded live in NY's Village Gate club and released on the standard jazz label Vanguard.

This is mostly a guitar power trio set up like Hendrix's Experience or Cream, with LC singing, and in one track, helped out by his wife Julie. The Opening track (that's its name, look it up ;-) is really a slow Hendrix blues, in the line of Hear That Train Coming, where Bronson's pedestrian bass and Wilkinson's drums take on Cox and Mitchell twists. After Later takes on a much quicker and jazzier tone and pace, but the Hendrix overtones remain. The Chick Corea track Saudade is completely unrecognisable (even the riff), even in the light of the early 70's, but LC shines with delays and echoes and torrid improvs flowing like bubbling lava.

Proof that LC had Cream in mind, the Can You Follow is a Jack Bruce cover, starting on a drum solo that could've easily fitted Ginger's play, but is probably the jazzier track on this album yet. Bronson's role is particularly interesting on this track (courtesy of Bruce himself), but LC's style early on veers McLaughlin-esque without verging on the vertiginous like McL. Later on in the track, LC shows a full range or tricks, treats, twists and licks that should get most guitarists gaping their mouths in awe. The closing Beyond These Chilling Winds is rather different, because penned by Larry and his better half and sung together, sounding even a bit folky, but once the first verses and chorus gone, the song embarks on a wild flurry of improvs taking us directly to paradise without much detours.

The album ends in a wild but direct end, suggesting there was much more to come that night and hopefully one day, this album will get a complete concert treatment, by adding the rest of the concert as a bonus tracks. One could easily file this album between Hendrix and Guru Guru's UFO album on his shelves. Essential to understand LC's origins and where he was heading at the time.