John Ylvisaker - 1972 - Recorded at a Housewarming for Fritzie

John Ylvisaker
1972
Recorded at a Housewarming for Fritzie 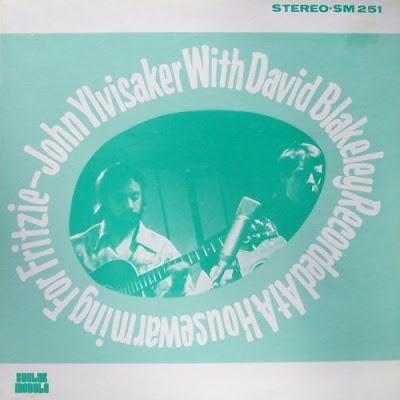 Prepare to be jolted right from the start with one of the most guttural growls imaginable. What is this – a pirate drinking song? Tom Waits with a throat infection? By golly if this custom isn’t one of the most down-home lps ever made! As the title indicates, this is a live recording of two guitarists, a wailing harmonica, and a handful of guests gathered around a living room microphone and hamming it up (with bass mixed in later). It’s a marvelous blend of back porch acoustic blues, spirituals, and folk originals – a complete about face from John’s Avant Garde lps. Lots of lengthy twangy raw bluesy jamming backed by a party atmosphere of hoopin’ and hollerin’, clapping, singing along – indeed I know of one collector that’s gone so far as to say they must have been stoned! Titles like ‘Glory Hallelujah’, ‘Gethsemane’, ‘Emmaus’, and ‘Annanias’ (which stops cold in mid-song for a comical shouting match between Pilate and the Pharisees). You’d expect radical hippie types, but back cover photos of the participants (cleverly cut out into house windows) reveals your basic young adult and kids church bunch. Brilliant, sincere, and spontaneous – the absolute antithesis of Christian labels with their studios and producers – the mere thought of anything like this appearing on such is ridiculous. Bravo, John!
Posted by Zen Archer at 8:21:00 PM