John Ylvisaker
1964
Don't Cut The Baby In Half 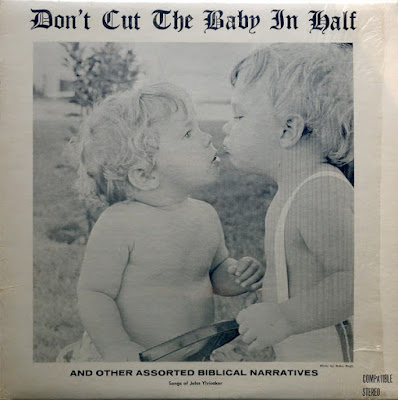 Recorded in 1965 during a convocation at Northwestern Seminary in Minneapolis.


John Carl Ylvisaker is perhaps best known for his song, “I Was There To Hear Your Borning Cry”.   He was born in Moorhead, Minnesota and is a graduate of Concordia College located there. For more than 50 years John’s words and music have been a powerful influence on the development of new worship materials for the church, with his compositions appearing in hundreds of worship resources.  He is renowned for his paraphrase of biblical text and theological astuteness, as well as his ability to recognize or write tunes people in the pew can readily sing.

In addition to being an artist and composer, John’s past experience includes teaching high school music, directing church choirs, and serving as the producer of SCAN, an award-winning weekly radio program sponsored by the Evangelical Lutheran Church in America (ELCA). John also has composed much of the original music for Lutheran Vespers radio broadcasts and ELCA videos, as well as theme songs for gatherings and events.

John has inspired audiences with his live performances and worship leadership at the many assemblies, conferences, and gatherings where he has appeared. Currently he is involved in producing recordings of his work. His copyrights cover more than 1,000 songs.

Just when you thought your John Ylvisaker collection might be nearing completion here comes this excruciatingly rare custom recording that reportedly has only a 100-200 press.  Many of the songs here are early acoustic renderings of titles that would later appear on his Avant Garde albums: ‘The Prophecy’, ‘Joseph’, ‘Desolation’, ‘Rich Young Ruler’, ‘Water Of Life’, ‘They Can’t Kill Me’, ‘Noise Of Solemn Assemblies’.  The performance features 12-string guitar plus bass, percussion, organ, a second male harmony (Bill Strom), and Amanda Ylvisaker on flute.  Side two introduces several otherwise unavailable cuts like ‘Anxiety’, ‘The Noodle In The Alphabet Soup’, and the title track.  Cool Livin’s ‘A Man And His Dog’ is done (here it’s entitled  ‘Dog Spelled Backwards’).  Portions recorded live before an audience at the Northwestern Seminary Convocation.  The verbal songs intros are preserved – he introduces ‘He’s Got The Whole Baby In His Hands’ as having “what they used to call a ‘nigger beat’ – they don’t call it that any more”.  Closes with a sing-along to the tune of ‘Michael Row The Boat Ashore’, after which John says “well that’s it”, followed by audience applause.  For those who don’t mind their Ylvisaker unplugged, this makes for another fine entry to his varied and distinguished catalog.
Posted by Zen Archer at 7:43:00 PM