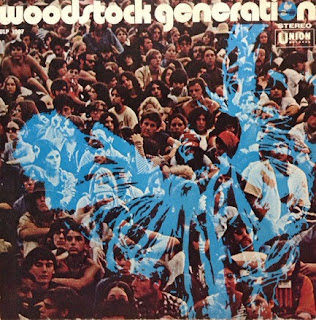 
Great japan Psych' Jazz Rock tribute album to the Woodstock Festival released on Union label. Behind The Soul Medium hides the name of famous japanese saxophonist, Jiro Inagaki, iconic member of the japanese Jazz Rock scene during the seventies. He plays tenor & soprano sax with musicians which later formed his Psychedelic Jazz Rock and Funk band 'Soul Media' based around Ryo Kawasaki, Yasuo Arakawa, Masaru Imada and Sadakatsu Tabata. Titles include three Woodstock performances by Sly & Family Stone (I Want To Take You Higher), The Who (Summertime Blues) and Ten Years After (Spoonful) but also Woodstock (written by Joni Mitchell in honor of the Festival), Rock 'N' Roll cover Mamma Told Me (Not To Come) by The Animals, Yasuo Arakawa' The Ground For Peace (composed especially for Inagaki), Knick Knack by Masahiko Sato and two originals composed by Jiro (Openning & Head Rock). All tracks arranged by Jiro Inagaki.
Well, this LP from 1970 by Jiro Inagaki & His Soul Media must be one of the grooviest and hippest albums ever from Japan, It's a dazzled mix of soul jazz, funk and a touch of rock, especially the psychedelic guitar effects (handled by Ryo Kawasaki). This LP is Inagaki's most sought after, and you know why when you hear it. So, put on your groovy shirt and do some funky mooves!
Posted by Zen Archer at 6:23:00 PM