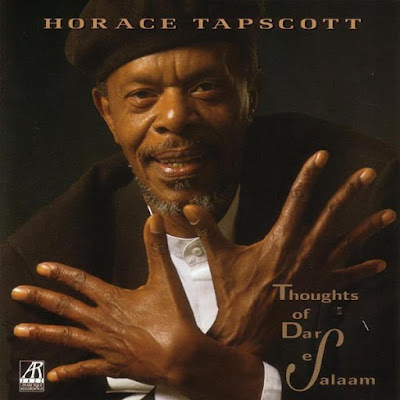 The final album by West Coast pianist and composer Horace Tapscott is one of sublime gentility, reaching harmonic elegance and meditative grace. Accompanied by Billy Hart on drums and bassist Ray Drummond, Tapscott moves through five compositions by others -- including Charlie Parker's "Now's the Time"; Sonny Rollins' "Oleo"; and Gig Gryce's "Social Call," as well as Thurman Greene's "Lullaby in Black" -- and adds four of his own to a set that is unusually devoid of odd time signatures and floating rhythmic techniques. There is a gorgeous waltz in "As a Child" that is big on rigorous attention to harmonic detail and not lilting danceability. Also, during the title track, Hart and Drummond move the four-four time signature into reversals of two-four or six-four and accent the living hell out of every turnaround in the score. Another notable track is the inventive chorded cascades Tapscott lays down in "Bibi Mkuu: The Great Black Lady," where he moves from a restatement of Ramsey Lewis' early version of "Wade in the Water" to an inversion of rhythmic pulse and melody, digging into the middle register for large open chords and angular arpeggios that point back to that source. The tuner rings with authority. If Tapscott would have had more time, there is no telling where he would have gone. Maybe he would have stayed in the same place he'd stayed for 30 years, helping out younger musicians from L.A. But with playing and composition like this, rattling the cage of the neo-trad punks, it's hard to believe they could have overlooked him forever.
Posted by Zen Archer at 7:10:00 PM