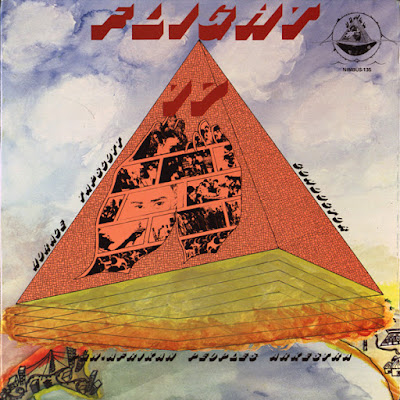 Other than half an album cut in 1969 for Flying Dutchman (which was shared with the John Carter/Bobby Bradford group), this release was pianist Horace Tapscott's recording debut as a leader. Tapscott's Pan-Afrikan Peoples Arkestra (consisting of two pianos, six reeds, two trombones, Red Callender on tuba, cello, two basses, a drummer, and a percussionist) had an unusual sound and made three records during 1978-1979. The band performs five group originals; surprisingly none were written by the leader. While there are some individual solos (particularly by Tapscott), it is the dense and frequently exciting ensembles that are most notable in this avant-garde but rhythmic music.
This isn't really representative of Tapscott's own music.  All the compositions are from members of the Arkestra and are generally odd.  The music is unpredictable.  The album starts with Tapscott playing piano by himself for almost 5 minutes, which keeps you guessing when the hell the group is going to do something.  They finally jump in and "Flight 17" ends up splitting up the band.  Some members play Free-Jazz while the others set up a recurring beat.  Its kind of funny:  not funny "ha ha" but funny-weird.  That sort of hard-to-put-your-finger-on feeling applies for the whole recording.  The Arkestra mixes so many styles of music from different cultures that the music is interesting but hard to completely enjoy.  It's all very experimental, like Sun Ra meets Alice Coltrane.  That sense of "under construction"...
Not your typical Tapscott fare. It reminds me a bit of some of Yusef Lateef's work with the "world music" influences. The only downside to this CD is that it is a needle drop, and though they found a pretty clean copy there are still a few ticks audible in quieter sections.
Posted by Zen Archer at 5:02:00 PM