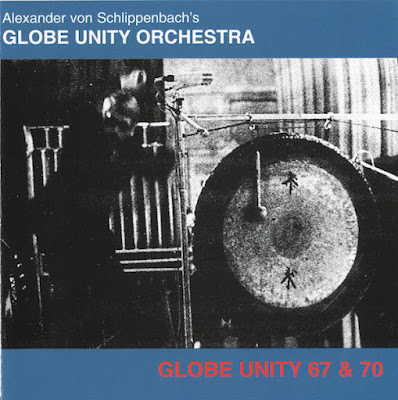 Track 2 was recorded at the Berlin Jazz Festival, Kongresshalle in Berlin, Germany on November 7, 1970.

Among the first European outfits dedicated to plumbing the possibilities of large group free improvisation Alexander von Schlippenbach’s Globe Unity enclave has been in a state of flux since its inception. But typical of the lot of large scale improvising ensembles documentation of the group’s various guises is skeletal in the extreme, just a mere handful of recordings in the space of as many decades. Rosetta Stone remnants from the Orchestra’s earliest years the pair of pieces on this recent UMS reissue illuminate yet another stage in Schlippenbach’s grand design. As he explains in the disc’s accompanying notes the impetus for applying free jazz ferocity to more populous dimensions was an auspicious commission by a Berlin-based arts agency. Joining together two existing ensembles fronted by Brötzmann and Schoof respectively, and further augmenting this formidable base with a burly contingent of fellow Europeans, the pianist/composer built an edifice of improvisors unlike any that had come before.
Schlippenbach’s wily charts are checkpoints, but the overarching velocity of the band seems largely unfettered from compositional constraints. Plummeting drums, scour-pad arco bass, and tumescent horns open the 67’ piece. Brass and reeds dislodge in formations strafing the rhythm section with the finely calibrated Doppler salvos. Mob rule ensues and individual voices are mostly subsumed in the torrential downpour of caterwauling sounds. A bass break erupts six minutes in as Kowald and Niebergall trade spiky arco barbs. Soon after both are trampled by a rushing tide of howling unison horns. Hampel’s mercurial flute struggles mightily to the top of the sound pile twittering single notes above the massive lower pitched cacophony of his comrades. Next up, the trombones of Mangelsdorff and Wigham leading the charge in a brief chamber reverie before another nosedive into collective combustible dissonance. Moving in wave-like oscillations the orchestra approximates a shoreline in the throes of full hurricane assault. In the piece’s final seconds the players suddenly subside into silence creating the effect of a storm miraculously lifting. Taking into account the sheer density and breadth of the orchestras the relative clarity of the recordings is an unexpected gratuity. Some of the ensemble sections warp under the considerable sonic weight of the orchestra at full muster, but for the most part sound quality is sustained.

The British delegation of Bailey, Parker and Rutherford changes the climate of the 70’ orchestra edition, broadening both the dynamics and conceptual space of the group. Bailey’s craggy strings are particularly effective in this regard and his pedal-dominated swells and drones dominate early on. The band also marches to the fractured beat of two different drummers and the team of Bennink and Lovens ignites a path of percussive fires from the onset. Darker both in mood in design, the Stygian composition they negotiate in subsets and en mass is less accessible than the earlier outing, but yields just as many ear-opening moments to the careful listener. Considering the gaping holes in Globe Unity’s recorded legacy as well as the consistency of vision that these pieces bring to light this reissue deserves high marks. For a conclusive snapshot of the orchestra’s earliest stages it’s the only game in town.
Derek Taylor

On this reissue, Alexander Von Schlippenbach leads two huge, all-star lineups of 18 European improvisers through two big band pieces that aren't just the crazy free explosions one might expect. While there's plenty of playing that's aggressive, dissonant, and, well, loud, these pieces are also ingeniously arranged. Von Schlippenbach scored both pieces using graphic notation, in which the composer dictates the shape of the piece, but might not tell the players what notes and rhythms to play. So while the improvisers here have a lot of freedom, they also hang together quite well given the number of musicians involved. There are plenty of solo passages, so the personalities of the individual players, such as Peter Brötzmann and Han Bennink, aren't lost in the crowd. Before he composed the frameworks for the two compositions here, Von Schlippenbach surely thought of earlier pieces of free improvisation for a large ensemble, such as John Coltrane's Ascension and Ornette Coleman's Free Jazz. While Globe Unity 67 & 70 is close to those pieces in spirit, though, it often differs widely from them in practice. Compared to Ascension and Free Jazz, the organization of Von Schlippenbach's music is not as similar to traditional American jazz and neither is the playing: the members of Von Schlippenbach's orchestra would rather shriek through their horns or bellow huge, roaring glissandi than play anything resembling the blues. Globe Unity 67 & 70 is rich, provocative European free improvisation that's well worth hearing for fans of any of the musicians who play on it.
Charlie Wilmoth
Posted by Zen Archer at 1:05:00 PM