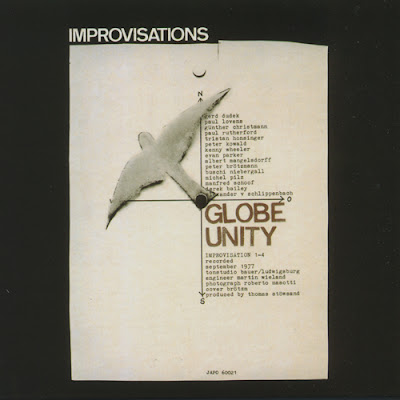 
Ashes, ashes, we all fall…up? Yes, says the Globe Unity Orchestra. The autonomous improvisation collective was formed in 1966 and has shifted ever since with as much openness to the unknown as the music it unleashes. Over the years, it has seen a veritable who’s who of modern jazz flit through its cage, including Anthony Braxton, Steve Lacy, Enrico Rava, and Toshinori Kondo. Because of the wealth of riches at its employ, the GUO’s eponymous unity undermines the need to dwell on individual talents. All the same, this early JAPO release, recorded in 1977, is an endearing document for, among other reasons, so nakedly marking the early careers of its great improvisers. Whether through Michel Pilz’s visceral baying, Peter Brötzmann’s gurgling of midnight oil, Derek Bailey’s jangly aphorisms, Kenny Wheeler’s playful fancy, or Evan Parker’s sopranic emulsions, the character of every voice remains prominent—astonishing when one thinks of just how many are involved.

Together these musicians are something greater than the sum of their parts, each an integral element in an alchemy that espouses the new by tapping into something that predates all of us. Throughout the album’s four numbered improvisations, the GUO sharpens ears as if they were pencils. With the epic concentration and polar range of Kubrick’s 2001: A Space Odyssey, “Improvisation 1” clings to some alien monolith in pure instinctual discovery, while “Improvisation 2” teeters in the sonic equivalent of a groggy yawn. It pulls every limb from the muck of dreams until it pops with renewed life. The feeling of tension is palpable: plucking, striking, and exhaling into infinity. Yet where the first half seems chained to an alternate reality, “Improvisation 3” taps into those cortical implosions sooner and measures their perimeter before diving headlong into the resulting froth. It is a brilliant percussive mash of banshees and waterfalls.

“Improvisation 4” is the album’s pièce de résistance. Longer than the first three combined, it teases with jazzy beginnings. Like the third, however, it locates the problem early on and unpacks it with guttural aptitude. The more one surrenders to this music, the more it splits into pieces and slides down vocal tracts like children at a playground. The depth of color and texture—of sustained light flecked with disturbing rhythmic shadows—dwarfs all that came before. The intimacy, too, with which it ends is arresting: only cello and bass overlapping to the clatter of a teapot without a whistle, burying themselves as deeply as they can until the bulldozers arrive.

A worthy curio for your cabinet.

Tyran Grillo
https://ecmreviews.com/
Posted by Zen Archer at 3:33:00 AM