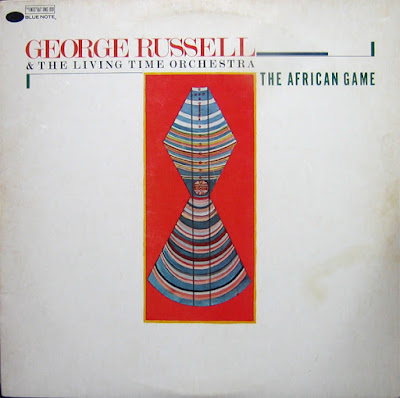 Recorded live at Emmanuel Church, Boston, Massachusetts, June 18, 1983.
This release is made possible with the help of the Massachusetts Council on the Arts and Humanities.

George Russell's The African Game is a major statement, a highly eclectic, nine-part, 45-minute suite for augmented big band that attempts to depict no less than the evolution of the species from the beginning of time to the present from an African perspective. Well, yes, this theme has been taken on by many an ambitious artist in every field, but Russell's work is remarkably successful because it tries to embrace a massive world of sound in open, colorful, young-thinking terms, with degrees of timbral unity and emotion to keep the idioms from flying out of control. There are traditional big band sounds here, but one is more likely to encounter electronics, African drumming by the five-piece group Olu Bata, atonality, rock, funk, even the sound of electric pencil sharpeners. Ironically, the section with the strongest injections of funk is entitled "The Survival Game (Survival of the Fittest)" -- possibly a barbed comment on the mercenary realities of the music business -- and "The Mega-Minimalist Age (Style Over Substance: The Decline of the Spirit)" leaves no doubt as to Russell's jaundiced view of commercial pop culture. The recording was made with help of grants from the state of Massachusetts and the NEA at the work's American premiere in a Boston church, and the performance sounds crisp and well-rehearsed. Indeed, this release Russell's first on a U.S. label in 13 years, and was an early sign from the newly revived (as of 1985) Blue Note label that they intended to be a major force in the jazz business again after sporadic patches of activity and neglect. So they have been ever since, despite deleting this CD.

One thing's for sure, you can't accuse of George Russell for thinking too small.  From his Lydian theory breaking ground for modal jazz, to his use of tape music and electronics, to writing at least one urban ballet suite, to being one of the few to name-check UNICEF as an inspiration for a composition ... He's definitely one of those composers who thinks of music as an evolving art - not only in itself, but in how we can perceive the world around us through music.

And this release is no exception - it's nothing less than the entire history of the human race as a funky, experimental modal jazz suite.  He sees the evolution of mankind as a game:  "God said grace / And rolled the dice / On the human race", and divides the work into "Events", beginning with "Event I: Organic Life on Earth Begins (Uni-celled Beings to Amphibians)".  It starts with the hiss of slithering out of the primordial slime, and slowly, quietly begins the journey from formlessness to intent.  From there, the Paleolithic Game is indicated by an Afro-throbbing drum circle morphing into a more 70's-styled jazz-funk, with a James Brown-ish emphasis on the first beat, yet with a strange syncopated six-count structure and free-jazz sax wailing that gives it a primal feel, while remaining heady.

That's pretty much the drift - alternating between recognizeable fusion, a world-beat tribalism, metaphysical noodling, and frequent blues licks.  Yeah - the blues.  It's not a cheery interpretation of mankind, as indicated by his snidely intellectual titles, like "Event VII: Cartesian Man (The Ascent of Technocentricity, and Its Division of Man and Nature, the Fragmentation of All and Everything)", which is actually a pretty fun tune - mechanical but chaotic, shifting and bewildering.  But then there's also horribly depressing tracks like "Event IV: The Survival Game (Survival of the Fittest)", following a rote, lengthy disco groove which MUST be a comment on the sad state of trying to survive as a professional jazz musician in the 80's.  Currently, we're living "Event VIII: The Mega-Minimalist Age (Style Over Substance, The Decline of the Spirit)".  Not too sure how the music is supposed to reflect that - it's actually one of the album's best tracks, as it swings, throbs, and grooves between genres, with sections of African drumming and passages of frantic city street hustle and bustle.

So then, is George Russell saying that that track just plays around with style, throwing any progressive musical theory aside?  Is he dismissing his own music as merely enjoyable, or celebrating it?  It's probably true that we live in an age of style over substance - we're certainly busying ourselves with a lot of fluff (hello, RYM!) and very static, backward-looking ideas about spirituality - evolution be damned.  As a race of people we're losing the game ... but as a child of this vapid age, at least I'm having fun playing it.