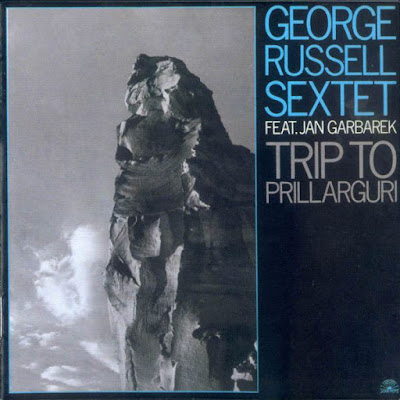 Wow! In a fair world, this exceptional modern jazz album would have been issued by a major American jazz label –like Prestige or Blue Note—with decent liner notes explaining who was playing and what was going on in it. But it wasn’t. It was released –twelve years late—by the Italian label Soul Not with virtually no liner notes –doesn’t tell who plays, where recorded—and as a result, almost no one bought it, even those, like me, who admired Russell’s work in the States in the mid-60s. The album was recorded in concert in Sweden in 1970. Pianist-composer Russell was 47. The players he assembled for the concert were young: saxist Garbarek was 23 and drummer Christensen was the oldest at 27. All of them, with the exception of trumpeter Davis, went on to distinguished careers in jazz. They are all very good here. Garbarek was just starting to find his voice: he fluctuates between his earlier infatuation with distortion a la Ayler, Sanders, Shepp et cie., and his later smoothed out, no vibrato, boring ahead focus on sound and silence. Guitarist Rypdal, a little older, had already developed his sound, which used the potential for distortion inherent in his axe. Andersen and Christensen, who would play together repeatedly, were as good a rhythm duo as any group could expect, capable of moving from straight time keeping to subtle rhythmic and sound variations (drummer Christensen) or complementing second melody lines (bassist Andersen). Christensen became even better at what he did –one of the subtlest, most versatile of modern drummers—but he’s doing it awfully well even here. As for Andersen, I ‘ve never heard him play better.

The set comprises four tunes by Russell including probably his best known composition, “Stratusphunk,” which was recorded by Russell’s sextet in 1959 on the album of the same name and the next year by the Gil Evans Orchestra on Out of the Cool; two tunes by Garbarek; and one by Ornette Coleman (“Man on the Moon”, which was released in 1969 as a special single –two tunes- vinyl EP to commemorate America’s moon landing). Anyone who has listened to a George Russell album knows what a great arranger and composer he was. Even on the tunes he’d didn’t write, there are interesting touches in ensemble and backing. Russell solos on this album, but they aren’t long solos. The major soloists are the three horns –Davis, Garbarek, Rypdal. This is exciting music. Though resolutely, modern, it is immediately accessible. Even the listener who has reservations about modernism in jazz should enjoy it. A lot.
Posted by Zen Archer at 7:32:00 PM