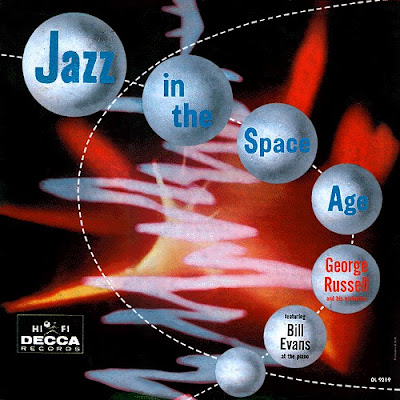 
FROM THE LINER NOTES:

Between 1959 and 1960, George Russell would record the album, Jazz in the Space Age, which showcased the talents of Bill Evans. On the original liner notes, Russell is quoted saying: Jazz is changing; the 60s could well be a crucial decade. One thing is certain. A variety of sounds and rhythms, many of which are alien to what audiences are used to, will find their way into jazz. Unaccountably, things we hear around us every day, very human things, have either disappeared or been left out of jazz as we know it. Progress is inevitable. Today's musical palette is just not adequate. All feelings relative to life and beauty cannot be validly expressed with techniques now in vogue. What is more, jazz is an evolving art; it is not meant to be restricted. The very nature of the music and its history indicate this. Fifty years later, here's the album to prove or not his sayings. Russell began leading his own sextets around the New York area and at festivals in 1960; he also toured throughout the Midwest and Europe. As a bonus, this release presents a complete live performance by the George Russell Sextet recorded a few months after the culmination of Jazz in the Space Age.


George Russell is probably the most influential jazz musicians that you've never heard of! If you are a musician, you may know him from his exceptional, and exceptionally difficult treatise on jazz theory "The Lydian Chromatic Concept"....but this theory, watered down and simplified, has been passed on to innumerable young jazzers educated at the Berklee School, in the theory of "chord scales". These chord scale theories are fine as far as they go, but Russell's concept goes farther and deeper.

This album is positioned at a watershed in George Russell's career. It represents the peak of his early "arranger's albums", in which Russell assembled a large & stellar cast of musicians (typically, as here, pinned on a number of stalwarts: the pianist Bill Evans, the bassist Milt Hinton, the guitarist Barry Galbraith, the alto player Hal McKusick) to play his formidably complex charts. Russell does not play on the album beyond contributing the eerie percussion opening to "Chromatic Universe", running a string of beads over tuned drums. Russell was after this album to change his approach, as reflected in _Live at the Five Spot_ & the Riverside albums: there he led a small jazz combo with himself at the piano, & pared back the complexity of his charts in a way similar to Gil Evans when he became a regular bandleader.
The album is divided between a series of three short "Chromatic Universe" tracks and three longer pieces. The "Chromatic Universe" tracks are features for the duelling pianos of Bill Evans & Paul Bley, one of the most memorable encounters in modern jazz. They play together against a tricky 5/2 rhythm-section backdrop, one which maximises the soloists' freedom: these tracks are in fact probably the closest Evans ever got to "free jazz". -- The three longer tracks feature charts that are meticulously detailed, with the characteristic off-centre polyphonic fanfares of Russell's early work. There's fine work from lesser-known players like Al Kiger & David Young, but the centrepiece is again a piano battle between Evans & Bley on "The Lydiot"--this time, not a simultaneous improvisation but trading fours.
This is a recording both enjoyable & historically significant. With _Ezz-Thetic_ & the Jazz Workshop date it's one of the peaks in Russell's oeuvre.
Posted by Zen Archer at 3:58:00 AM