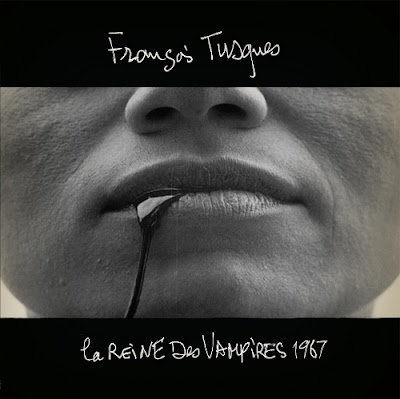 All previously unreleased tacks originally composed for "Les Femmes Vampires" - part two of the 1968 French vampire melodrama "Le Viol Du Vampire" directed by Jean Rollin (originally intended to be a longer series).
Allt racks are full length, pre-cut sessions as presented to Jean Rollin and editor Jean-Denis Bonan in 1967. Tracks A1-A5 appear in heavily edited form in the original film that debuted in Paris, May 1968.
Tracks B1-B6 are exclusive unheard demo sessions rejected by Rollin in 1967. Extracts from tracks A1-A4 also appears in the Jean Rollin film "La Vampire Nue", 1970 (without prior consent).
All tracks named in accordance with the working title of the project "La Reine Des Vampires".


In 1967, French avant-garde composer and pianist François Tusques was asked by director Jean Rollin to make the soundtrack for a vampire melodrama, called "Les Femmes Vampires" (the vampire women), then erroneously announced as the first French vampire movie ever. Tusques assembled a band with Barney Wilen on tenor sax, Eddie Gaumont on violin, Jean-François Jenny-Clark and Beb Guérin on bass. As you can expect, the music is eery, haunting, full of dread, anticipation, angst, anxiety and fear. It is ominous, dark, unpredictable, gloomy and sinister. It is equally well-paced, slow, refined, sophisticated, precise and accurate. In contrast to what was the norm at that time, the soundtrack has no clear theme, just sounds full of dramatic tension and effect. The violin, the sax and the bass create long phrases hanging in mid-air, coming from nowhere, not seeming to go anywhere, yet with astonishing presence when they are in the here and now, immensely powerfully.

The album gives the complete recording of the session, even if only parts were used for the soundtrack (think of Mike Oldfield's score for The Exorcist). The A-side presents the full pieces from which some snippets were used in the movie, the B-side brings material that was not used in the movie, even if it is equally strong. When Rollin made his second vampire movie, "La Vampire Nue" (the nude - female -vampire), he re-used the material on the A-side, rearranged it and all this without Tusques' prior consent.

To have this music back, now, after almost fifty years, is amazing. When you watch the movie excerpts on Youtube, the movie looks incredibly dated, real sixties' stuff. And probably the most amazing thing is that when you listen to the soundtrack, it still sounds incredibly modern. It is today's music. Think of the vision and the audacity it must have required then.
Posted by Zen Archer at 1:34:00 AM