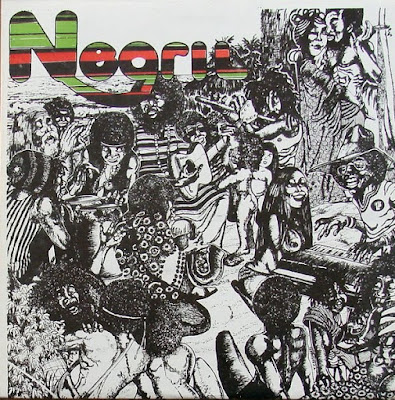 Negril is an instrumental album originally released in 1975 from a session produced, arranged and mostly composed by Eric Gale, and including some of Jamaica’s best-known musicians. It bears the name of an impoverished Jamaican seaside village which, in 1975, was yet to become a popular tourist destination and had unsophisticated accommodations, but a splendid beach and natural beauty which inspired Gale to memorialize it.

Negril was recorded at the Harry J Studio in Kingston, Jamaica. It was originally released in Jamaica by Micron Music Ltd. and in England by Klik Records (KLP9005). The album is now out of print and sellers demand high prices for used copies.

Though Peter Tosh is not widely known for his guitar skills, he’s got ’em, and they are on full display in this track ‘East Side West Side’, a stupid, super-sick, stank skank tune with tons of wicked guitars and a ridiculous vibe to go with it. This album was re-released in 1997 under the title ‘Peter Tosh and Friends – Negril.‘

In my opinion, this album almost matches ‘Legalize It’ as my favorite Tosh album. …..

For some reggae connoisseurs this is one of the greatest record you never heard.
Eric Gale was home in Negril wailing on his guitar behind some serious lambs bred. This album was recorded in Jamaica before Eric Gale went back to New York to become one of the most in-demand East Coast session guitarists. The music is laid-back instrumental Reggae.

This album is some of the most musically advanced reggae you can find. The tracks are all sizzling with dancing groove energy that is the perfect mix of soul and reggae. Paints a perfect picture of the beaches of Negril in Jamaica. If you like reggae and James Brown and Marvin Gaye and Phish, you should give this album a try.
Have a look at the list of the involved musicians and you get an idea of the quality