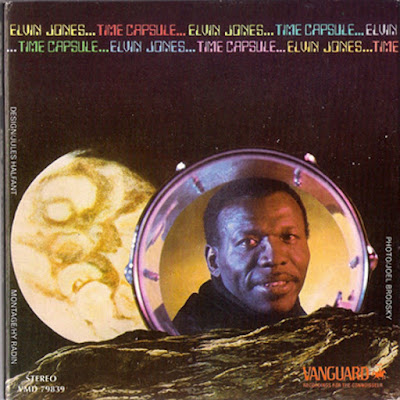 
Elvin Jones' final album for the Vanguard label in 1977 was his most melodic and "produced" album from the period. His trademark fiery style is slightly reigned in within these highly arranged and produced tracks, which delve further into group-based jazz-funk fusion - quite different from the looser, post-electric Miles jamming which infused the previous year's "The Main Force", which I posted yesterday.

That said, there's some great playing and textures on "Time Capsule", with ample solo space offered and taken with gusto within these tighter structures. After this album, Jones would return to more 'traditional' post-bop territory and acoustic instrumentation with his newly-named "Jazz Machine" on 1978's "Remembrance" for the MPS label.

Guitarist Ryo Kawasaki and percussionist Angel Allende return from the previous album. Whereas Kawasaki's electric edge somewhat stood out on "The Main Force", here it has become something of the norm. Once again he holds composition credits for the opening track : "Frost Bite".

With the reeds players working more in unison melodies, and Kawasaki contributing single lines and wah-chops, Kenny Barron's fender rhodes holds much of the harmonic background for the album. He had appeared on one track of 1975's "New Agenda", but here he's a strong presence throughout.

Barron's solo work is great on tracks like "Time Capsule", "Spacing". and my personal standout track "Moon Dance" (see preview at top of post). The album catches Barron in his peak period as a rhodes player, coming after his albums "Sunset to Dawn", "Peruvian Blue" and "Lucifer" ; and just before "Innocence", after which he would mainly return to acoustic piano. So one more for the Kenny on electric piano discography.

Drummer alert! Mark Feldman has transcribed some of Elvin's patterns for "Digital Display" over here at "Bang! The Drum School".

The dominant new guest here is alto saxophonist Bunky Green, who composed three of the five tracks here. After a decade-long recording break he had returned earlier in the year with his Vanguard album "Transformations", also produced by Ed Bland. Much of that album borders on proto-"smooth jazz", with highly modal covers of pop hits, but on "Time Capsule" he has a rougher, more interesting edge, perhaps from the company he's keeping here.

Tenor saxophonist George Coleman had played on some of Jones' later Blue Note releases, as well as a few Strata-East releases like Charles Tolliver's "Impact!" ; the Jazz Contemporaries' "Reasons In Tonality" and Keno Duke's "Sense Of Values". In 1977, the same year as this album, he also played on Charles Earland's "Smokin".

At this stage, prolific flautist Frank Wess was straddling both the jazz world and the disco-funk session game - recent credits had included albums as diverse as Sister Sledge's "Circle of Love"; Van McCoy's "Disco Baby"; Oscar Brown's "Brother Where Are You"; Woody Shaw's "Rosewood"; and Crap Jazz Covers' favourite, "Sweet Buns and Barbecue" by Houston Person.

In the few years preceding this album, bass player Juni Booth had worked on Larry Young's "Lawrence Of Newark" ; McCoy Tyner's "Song of the New World" and "Atlantis"; and Joe Bonner's "Angel Eyes" . 2nd bassist Milt Hinton has been described as probably appearing "on more records than any other musician", so feel free to peruse his thirteen pages of credits.
Posted by Zen Archer at 12:13:00 AM