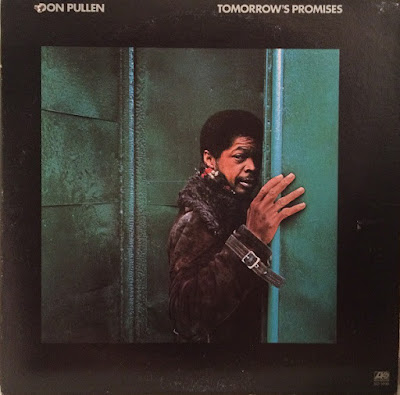 
Offering healthy doses of the avant garde but grounded in a blend of hard bop and R&B (60s groove and 70s funk), this set opens with a hard-driving 10+ minute Pullen original called “Big Alice,” George Adams on alto, Michael Urbaniak on electric violin, Randy Brecker on trumpet, Pullen on piano, each getting time for solos as the rhythm section (bass plus three percussionists) keeps the sound powering along, a fairly funky freight train bouncing down the line.  After the reflective post bop of “Autumn Song,” the side picks up the pace again, closing with “Poodie Pie” (Pullen, Morgan Burton, Sterling ” Satan” Magee), Mr. Satan’s guitar work more pronounced and helping carve out the groove, the cut featuring Pullen on clavinet, producer Mimaroglu with electronic tracks. While the groove moves through various tempos and moods, it never completely forgets where it started.

The second side opens with another stand-out Pullen original called “Kadji,” this number featuring an almost hip-shaking tempo but sounding like it owes something to Coltrane’s explorations of the African continent.  After a free-form duet with Pullen and Adams, the set closes with a vocal cut, a reflective message song called “Let’s Be Friends” featuring the pipes of Rita DaCosta.  While this set doesn’t end as strong as it opens, it remains interesting and enjoyable, moving through moods and tempos to create a totality of effect.  There’s certainly enough solid material to make this recommended listening.