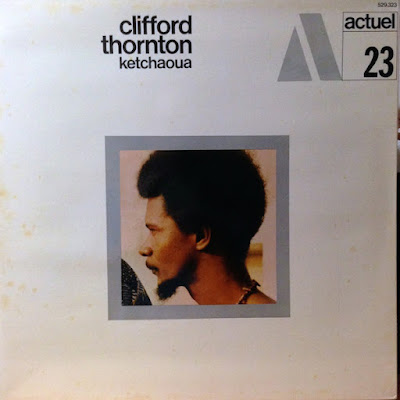 
Clifford Thornton's only Actuel date as a leader is, like many of the others in this BYG series, an all-star blowing session highly indicative of the times. For some, it will be difficult to tell whether taking credit for composing these pieces is a lost cause. This is some very free music and, save for a handful of scored passages, almost wholly improvised. A number of the scene's top players make appearances here in different groups. On the large ensemble pieces Thornton is joined by Grachan Moncur III, Archie Shepp (on soprano sax), Arthur Jones, Dave Burrell, Beb Guerin, Earl Freeman, and Sunny Murray. Otherwise, "Brotherhood," a piece for quintet, is performed by Thornton, Jones, Guerin, Freeman, and this time, drummer Claude Delcloo, while on "Speak With Your Echo" only the two bassists (Guerin and Freeman) accompany Thornton's cornet. This piece in particular is especially enjoyable and reminiscent perhaps of Arthur Jones' fantastic ballad, "Brother B," from his own Actuel LP, Scorpio. At times the ensemble pieces sound like a Pan-African Morton Feldman, and at others, hazy, psychedelic post bop. Fans of brooding and contemplative improvised music will find a great deal to enjoy here. In fact, many would argue that this is the best LP under Thornton's leadership.

1969's Ketchaoua leaps through many styles in a way that reminds me of the Art Ensemble of Chicago and also Archie Shepp in this era—Shepp appears on half of the album.  Side A contains two long tracks that feature large ensembles and a lot of simple, interweaving percussion.  Both tracks gradually evolve into brief periods of recognizable jazz styles before floating back into more abstract terrain.  The opening title track might be the least prominent appearance from drummer Sunny Murray, who blends into the massed percussion.  The two tracks on side B are opposite extremes, though both feature smaller groups.  "Brotherhood" draws from New York energy jazz, with Claude Delcloo's percussion prominent in the mix.  "Speak with Your Echo" ends the album with its sparsest arrangement, featuring only Thornton and two bassists.  The recording quality varies, with the large groups sounding better than "Brotherhood", where the explosive percussion reverberates awkwardly in a boxy room. Who cares, it still sounds great.
Posted by Zen Archer at 8:22:00 PM