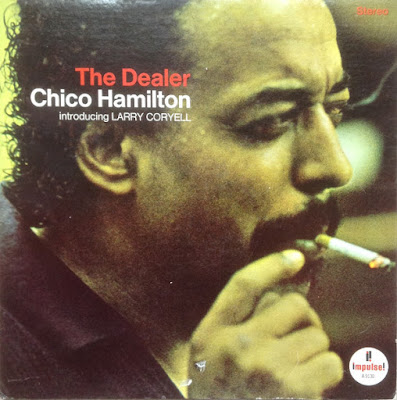 Drummer Chico Hamilton introduced many top young players during his years as a bandleader, but few probably realize that Larry Coryell made his recording debut with Chico a year before joining Gary Burton's quartet. The Dealer marks Coryell's initial appearance on record, and at times he sounded oddly like Chuck Berry (especially on "The Dealer"). Also heard on this set are altoist Arnie Lawrence, bassist Richard Davis, organist Ernie Hayes (on two numbers), and, on his spirited boogaloo "For Mods Only," Archie Shepp making a rare appearance on piano. Most of the performances still sound surprisingly fresh, especially the explorative "A Trip," making this an underrated but worthy release.
Posted by Zen Archer at 4:59:00 AM