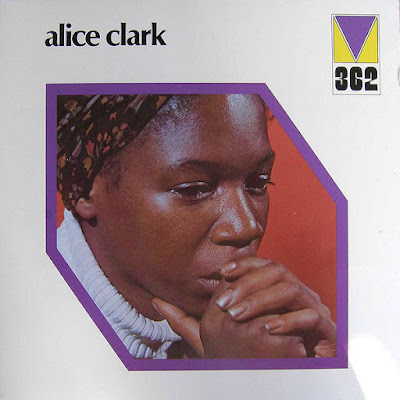 This is an amazing soul album that’s highly prized among hardcore soul enthusiasts!
Share in the secret and find out why this album is so highly regarded!

This is an incredible album from the early 1970s. She’s kind of a soul belter but with a groovy jazz sensibility and a bluesy wistfulness. If you like any of James Brown’s women: Lynn Collins, for instance, you’ll love this.

There weren’t many vocal albums on the Mainstream label during the early 70s, and this rare soul side is a real overlooked gem! Alice Clark has a rich soulful voice, with a style that sounds a bit like Esther Marrow, mixed with some of the lead vocalists in Voices Of East Harlem — a really right-on sort of sound that’s totally great, and way hipper than most 70s chart soul! Arrangements are by Ernie Wilkins, who brings in a touch of jazz — but again, with a much hipper feel than most of his other backings — and most of the tracks are quite obscure, well-written tunes — of the sort of material you might expect to hear sung by Gil Scott-Heron or Donny Hathaway.

The self-titled 1972 disc from Alice Clark has more than stood the test of time, it is a sublime masterpiece of R&B/pop from the house of Bob Shad, the jazz producer who founded Mainstream Records, the original home for this superior project. Perhaps it isn’t a coincidence that Clark’s repertoire is exactly the kind of material Janis Joplin would pick up on in her days after Big Brother & the Holding Company, as this was also the first imprint that Joplin & the Holding Company recorded for professionally. Jimmy Webb’s “I Keep It Hid” starts things off, one of the singles released from this original package and a nugget from another soul masterpiece, Supremes Arranged and Produced by Jimmy Webb, when Webb oversaw the post-Diana Ross girl group the same year as this release. A rendition of Fred Ebb and John Kander’s tune, “Maybe This Time” from the motion picture Cabaret, is included along with three compositions from “Sunny” author Bobby Hebb. The collection of material from Webb, Ebb, and Hebb is actually genius A&R because all of it is a perfect fit. Northern soul fans and R&B critics are aware of this hidden treasure, but the buildup in this review of all the magnificent trappings shouldn’t overshadow the fact that Alice Clark delivers the goods from start to finish. Some call it acid jazz, but truth be told, beyond the cult niches of space age bachelor pad and Northern soul — the base that keeps obscure gems such as this bubbling on a variety of radar screens — this is some of the best R&B you’ve probably never heard. The trifecta of Bobby Hebb songs include “Don’t You Care” and “Hard, Hard Promises“, two titles Hebb has yet to release on his own.

The third is an up-tempo version of “The Charms of the Arms of Love” which concluded his 1970 album Love Games. Clark rips apart “It Takes Too Long to Learn to Live Alone” in wonderful fashion with tasteful guitar, chirping horns, and restrained vibraphone. Juanita Fleming’s “Never Did I Stop Loving You” is just brilliant as the vocals take off into different dimensions inside and between the unique melody. The final track,”Hey Girl“, is not the famous Carole King/Freddy Scott hit — it’s a true find originally covered by Donny Hathaway and written by Hathaway’s percussion player, Earl DeRouen. Here Clark changes it to “Hey Boy” in a lively, jazz-heavy jaunt which concludes the Toshiba/EMI version of this dynamite set of recordings that should have made Alice Clark a superstar.