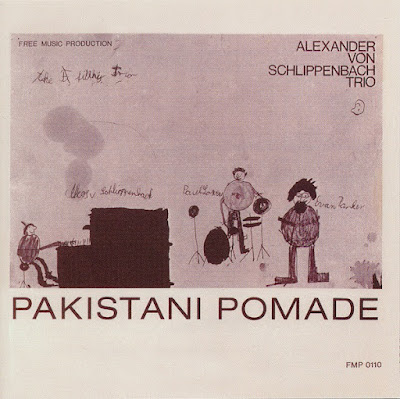 The reissue of this 1972 date by Alexander Von Schlippenbach's (arguably) greatest trio is a welcome addition not only to the Unheard Music Series by Atavistic, but also as a return of a brilliant, symbiotic document of European free jazz. That this is European free improvisation cannot -- but listening to these pieces -- be overstated. The sonic, textural, and even harmonic concerns of this trio are very different from, say, Anthony Braxton's quartet at the time or the Art Ensemble of Chicago. In saxophonist Evan Parker and drummer Paul Lovens, Von Schlippenbach found the perfect foils -- a pair of improvisers who had effectively cast off the relationship mantle to American jazz and free jazz. Pakistani Pomade is composed of short- to medium-length pieces, the longest of which, "Moonbeef," is ten minutes, the shortest a mere 43 seconds. What is most evident is how Von Schlippenbach's improvisational sensibility, though influenced by Cecil Taylor, had already moved off into its own type of formalism that required the breakdown of each idea into its smallest parts. Given that this is the way Parker has played from the beginning, it was a suitable expectation. On "Sun-Luck, Night-Rain," this is made evident by the charging in of large chords that smatter -- albeit somewhat melodically -- across the front line for a full minute before the rest of the band enters. Once they do, the chords become smaller and smaller until they are just single notes played against the clustering legato of Parker and Loven's wash of cymbals. On "A Little Yellow (And Two Seconds Monk)," the pianist lays out his chords and never ceases playing them until just before the end of the piece. They repeat not exactly in cycle, but in reference to Parker's solo, which, on the soprano, becomes a short, bleating revelation of harmonic juxtaposition and extreme dynamics -- it is only here that the single notes emanate, often against the drums -- from Von Schlippenbach's piano. The title track figures Monk and Herbie Nichols in its wonderfully rhythmic and convoluted opening statement from the pianist. Loven counts off into the void against the side of a tom tom, gradually picking up stream as Von Schlippenbach adds a series of chords and single-note keyboard runs to the body of the piece, before Parker enters with a warped version of the opening clarinet in "Rhapsody in Blue." The rest becomes a study in various ambiences rather than fury, depositing the bent-up notes Parker squeezes from the bell of his horn. There are four bonus tracks included from the session, all of them alternate and unfinished takes of "Pakistani Pomade" -- some humorous, others aborted, others that could have been interchangeable, but all of them very different from the master take. This truly inspiring music was made by a band who had yet to see how much taste, grace, and elegance they possessed. Pakistani is essential listening for vanguard jazz fans.