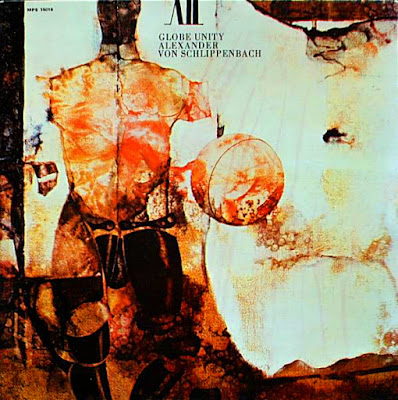 One of Europe's premier free jazz bandleaders, pianist Alexander von Schlippenbach's music mixes free and contemporary classical elements, with his slashing solos often the link between the two in his compositions. Schlippenbach formed the Globe Unity Orchestra in 1966 to perform the piece "Globe Unity," which had been commissioned by the Berliner Jazztage. He remained involved with the orchestra into the '80s, with the exception of one period from 1971 to 1972. Schlippenbach began taking lessons at eight, and studied at the Staatliche Hochschule for Musik in Cologne with composers Bernd Alois Zimmermann and Rudolf Petzold. He played with Gunther Hampel in 1963, and was in Manfred Schoof's quintet from 1964 to 1967. Schlippenbach began heading various bands after 1967, among them a 1970 trio with Evan Parker and Paul Lovens (both were also in his quartet along with bassist Peter Kowald), and a duo with drummer/vocalist Sven-Ake Johansson which they co-formed in 1976. Schlippenbach has also given many solos performances. In the late '80s, he formed the Berlin Contemporary Jazz Orchestra, which has featured a number of esteemed European avant-garde jazz musicians including Evan Parker, Paul Lovens, and, as the orchestra's second pianist, Misha Mengelberg, then Aki Takase. Alexander von Schlippenbach has most frequently recorded for FMP, although Japo, Saba, and Po Torch have also released some of his work. In 2000, the Atavistic label was added to this list with their reissue of the Schlippenbach Quartet's 1975 album Hunting the Snake.

Upon first listen I knew this was something special but after another listen, about a month later, I've added this to my personal upper echelon of free jazz albums, since this may be one of the greatest records in the genre ever crafted. Alexander von Schlippenbach may be the most talented person in the world of free jazz, and his abilities are outrageously overshadowed by others like Coltrane and Coleman, great though they may be. For free jazz to be successful, I find that there must be a level of both control and chaos, recognizable technical skill as well as pure unfiltered emoting, and Von Schlippenbach's playing has all of these attributes.

Of course, Von Schlippenbach isn't the only musician here, and the others have to come at least kind of close to him for the music to meld together as a whole. Luckily, the lineup here is extraordinary, with Manfred Schoof, the legendary Peter Brötzmann, and Can drummer Jaki Liebezeit (RIP) among the names listed. The collective chaos on side A is masterfully performed, excellently cacophonous, and is more than fulfilling enough to sustain for the entire run time (dig those tubular bells). Side B is quieter but still an expertly crafted exercise in commanding order in chaos, with a hilariously wide variety of instruments being played (duck call, maracas, siren, and is that a flex steel I hear?), mostly during the opening but to a lesser extent they are present throughout.

Less controlled than either The Living Music or The Morlocks, more instrumentally dense than Stranger Than Love, Smoke, or Pakistani Pomade, this may well just be Von Schlippenbach's best album, which puts it high in the running for the best free jazz album. For fans of Ascension and also Mass Hysterism in Another Situation.
Posted by Zen Archer at 3:29:00 PM