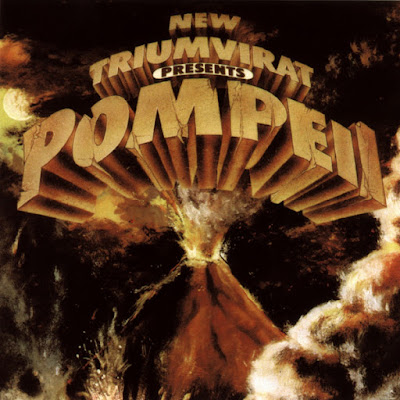 
Triumvirat, is one of the most underrated bands in prog' history, they're often accused of being ELP clones without remembering that their arrangements are so unique that the similarities don't matter at all when the sound is so spectacular as in their first three albums.
After the great commercial and musical success of Illusions on a Double Dimple and Spartacus, the band releases the slightly inferior Old Love Dies Hard, but this time they hire two new musicians Dick Frangenberg for the bass (allowing Köllen to dedicate fully to the guitar) and Barry Palmer as lead vocalist due to the problem of Jürgen with his hard German accent, but after this release Köllen and Bathelt leave Triumvirat, leaving Fritz as the only original member of the once great trio.

Of course Jürgen Fritz was not happy with he idea of an early retirement at the peak of his career, so he makes a slight change in the name of the band to The New Triumvirat and he stays as the only official member inviting Peter Pettereit for the guitar and bass, Curt Cress in Percussion and Barry Palmer as vocalist.

With this lineup The New Triumvirat releases another conceptual album about Roman history, this time not about gladiators and wars but about the natural cataclysm and volcanic explosion in Pompeii.

Being a Triumvirat fan and feeling that they could do a great work about this concept bought Pompeii the same day it was released, but it was a big disillusion,

The album starts very promising with the Earthquake that has a very similar sound and atmosphere as Spartacus, great changes, and strong keyboard solos made me believe Pompeii could be another masterpiece, but the reality was different, immediately after this song ends the dream vanishes.

It's evident at the first listen that the music has almost no relation with the concept, the arrangements without Köllen and Bathelt are far bellow Triumvirat's level, Barry Palmer sounds like a bad version of Sting that makes me miss Jürgen's accent but great voice and Curt Cress is good but not in the level of Bathelt.

The second song Journey of a fallen Angel is a clear example of most of the album, Fritz has good ideas but doesn't has the help required to develop them, seems the band doesn't know where are they going.

But not everything is bad, Fritz abilities as a composer still are present in moments of the album like in Viva Pompeii, The Rich Man and the Carpenter and Dance on the Volcano, songs in which remains the great sound that turned the German trio one of the best bands outside the UK and made me dream of a better future for The Rat. This are by far the best tracks of the album

It will be long and boring to comment song by song this album because there's not much more to be said. Only want to add that the most important achievement of The New Triumvirat in Pompeii is that we can still listen the great keyboard virtuoso Jürgen Fritz at the peak of his abilities.