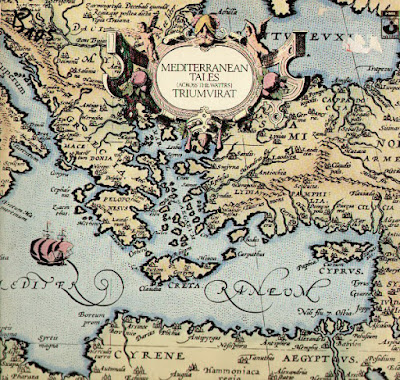 In 1972 this German trio had the courage to start their careers releasing a semi conceptual album in a foreign language, and they did a great job. Often dismissed by critics as a "B" class ELP clones, Triumvirat is far from being that simple, specially because Mediterranean Tales is a Symphonic album and ELP is a Classic Prog' band something absolutely different, we know of course "The Rat" and specially Fritz have some Emerson influence (they are declared fans of "The Nice") but their arrangements and lyrics are absolutely unique that deserve much more recognition than they got.
Must add that I believe Triumvirat at their peak is not less than ELP and most of the "big 5" prog' bands.

The founding members were Jürgen Fritz , Hans Bathelt and Werner Frangenberg but the third one decided to continue his career in a pop band, so he was replaced by Hans Pape, a talented bassist and very decent vocalist, this is the lineup that recorded Mediterranean Tales.

Incredibly the album starts with a 16 minutes multi part epic "Across the Waters" in which the band combines various classical influences that go from Baroque to Romantic, Jurgen Fritz is impeccable with his keyboards even when his German accent is hard to swallow by purists. A very good song and impressive starting point for a career.

"Eleven Kids" is a simpler song, which starts with a classical keyboard instrumental strongly supported by powerful bass and drums, but soon changes into a simpler tune where the band shows their pop side even when you can find some psychedelic fugues and classical chords, weaker than the previous but still pretty good track.

"E Minor 5/9" is a more eclectic song with strange timing where bass and drums carry the weight of the music except in the middle srction where a psychedelic keys semi solo breaks the repetitive rhythm and gives extra brightness, probably the track that reminds me more of The Nice or early ELP.

The original album ends with "Broken Mirror" which IMO is the best track because the band shows what their classical sound will be, incredible piano and complex structure that prepares the listener for Triumvirat's next two releases adding a jazz fusion section.

The Digital Remaster edition contains four more tracks "Be Home by Tea" (edition of part of the opening Track), an also edited version of "Broken Mirror" and two more songs ("Ride in the Night" and "Sing Me a Song") that probably didn't reached the original album due to the limitations of the vinyl format, but much weaker than the all the previous.

A very good album even when the band is not in the peak of their creativity that will be reached with Illusions on a Double Dimple and Spartacus. An excellent addition for any prog' collection and a must have for Triumvirat fans.
Posted by Zen Archer at 11:17:00 PM