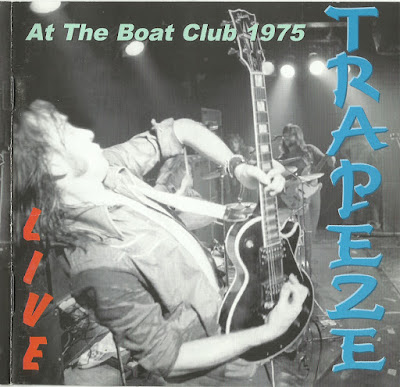 
Trapeze began in Wolverhampton, England in March 1969. The original five piece band consisted of Mel Galley, Glen Hughes, Dave Holland and ex-Montanas John Jones and Terry Rowley. They made their television debut on July 7th 1969 on the BBC show 'Colour Me Pop' which showcased new talent in the music industry. It was eagerly viewed by the A&R departments of record companies looking to sign new bands to their roster. Trapeze walked off with the 'Most Popular Group' award and were besieged by offers of recording contracts. They eventually settled with the Moody Blues label Threshold and recorded their first album simply titled Trapeze' in 1969, which received rave reviews and important airplay on the BBC's Radio 1.

With tours booked to take in both Europe and America, an underlying change of direction started to develop in the camp. The gentler harmonies on their first album were to get heavier and this led to both Rowley and Jones leaving the band. Trapeze then became a trio of Mel Galley, Glen Hughes and Dave Holland, which played with a higher energy, harder rock approach. Their second album 'Medusa' containing the classic tracks 'Black Cloud' and 'Jury' was released on 13th November 1970 to excellent reviews. It proved to be the watershed of their career and it started a growing interest in the USA with big demand from concert promoters and radio stations. The largest fan base developed in the South as Trapeze shared equal billing with bands like ZZ Top, headlining large arenas. In Houston, they sold out two shows in one night, literally bringing the house down as the balcony collapsed due to excess fans and weight.

The demand from America meant that Trapeze made fewer appearances in their native UK, although when they did return, Led Zeppelin drummer John Bonham would always try and catch up with the band, often joining them on stage for the encore. He once said that "Trapeze are the best three piece band I have ever seen". Other fans of the band included: Gary Moore, Jimmy Page, Bonnie Rait, David Bowie, Chaka Khan and Stevie Wonder. Due to their hectic touring schedule, there was no new album from the band in 1971 as they didn't have time to write new material. However, in the summer of 1972, sessions with a new producer began for their next album, which was finished by December. The third I album titled 'You Are The Music..We're Just The Band' was a classic and again received universal critical acclaim. The new material added depth and merged funk and soul with " white power rock. In just three and a half years, the band had notched up six tours of America and two classic rock albums. It was regarded in the States that Trapeze were just one album away from superstar status but in June 1973, things were about to change. After : watching the band several times, Deep Purple 3 on the look-out for someone to fill the vacancy left by departing bass guitarist Roger Glover,  made Glen Hughes an offer few could have refused. Glenn joined Purple in time for the 'BURN' sessions and tour, initially seen as a . devastating blow to Trapeze.

Having finished with Warners, Trapeze then played a series of live gigs to complete their existing commitments as a band before they temporarily disbanded. This live set was recorded during that period, originally for a live radio broadcast. It captures the band in fine form playing funky riffs and favourite songs to a small enthusiastic audience at Nottingham's legendary Boat Club, a venue which has seen many major British rock bands pass through. Just weeks later, Mel Galley and Dave Holland had joined up with ex-Moody Blues John Lodge and Justin Hayward in The Blue Jays. Trapeze reformed in late 1976 with Pete Goalby taking over the vocals for the album 'Hold On'. In 1979 original drummer Dave Holland decided to quit the band and join heavy metal band- Judas Priest, notching up seven albums and countless world tours. Trapeze finally disbanded again in 1981 when guitarist Mel Galley joined David Coverdale's Whitesnake touring the world non stop for the next two years. In 1994, to celebrate their 25*n anniversary, Trapeze reformed once more with the 'Medusa' trio of Galley, Hughes and Holland touring both the UK and their old stomping ground the USA.

It was great fun recording and touring with the band throughout the 1970s. I suppose overall, my favourite album was 'You Are The Music' but when Glen left the band, we still had much to offer and decided to become a four piece adding Rob and Pete who quickly gelled together. After a short period of rehearsals, we left for a US  tour and then went in to record studio sessions for our 1974 album 'Hot Wire'which I still think is a great album. Our sound while still funky, became more harder, rockier and less souly. We introduced some of the new songs and I took over all the vocals and, shared lead guitar with Rob using as always my black Les Paul. I didn't really go for effects but used an occasional wah wah. One of my favourite tracks to play live was 'Black Cloud' which remained in the set throughout the 1970s. We were playing large 10-20,000 seater venues in the southern states where we had a strong following. One of the highlights I guess, was playing the Cotton Bowl in Dallas with The Stones, The Eagles and Montrose. Although we played smaller venues when returning back home, it was good to play venues like The Marquee and The Boat Club where there was always a great noisy crowd and good rocking atmosphere. This recording was made just before we decided to take a break. Our record contract had finished and we wanted time to write new material. It was one of the last gigs by the four piece of Dave, Pete, Rob and myself. Hope you like it.
by Mel Galley 2003
Posted by Zen Archer at 11:14:00 PM