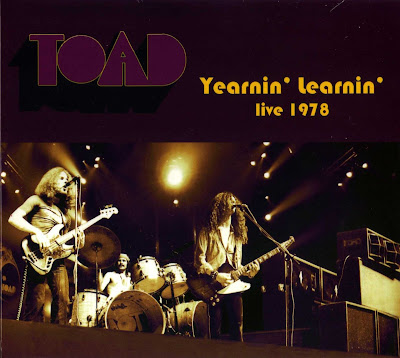 
"This previously unreleased live performance by Toad was recorded near Geneva in 1978. As Vic Vergeat is finely accompained by Werner Froehlich and Cosimo Lampis, the gig soars at very high levels of energy. The difference here is that at the time Vergeat was heavily influenced by black music (funky) and all that results in covers like Yearnin’ Learnin’ by Earth Wind & Fire and other funkyish stunts. You also get Tomorrow Blue, the heavy boogie rock in Down to the Bone, and of course Hendrix.The virtuosity and versatility of Vergeat’s guitar come out in full, and this is a must-have for all the fans of Toad as well as of good blues-rock."

"Swiss hard rock and blues-rock outfit Toad leaped (sorry) onto their country's charts with their debut single, "Stay," in 1972 -- paving the way for the massive Swiss metal movement of the early '80s and such notable bands as Krokus and Celtic Frost. Mainly a three-piece, consisting of Vittorio "Vic" Vergeat (guitar/vocals), Werner Frohlich (bass), and Cosimo Lampis (drums), Toad often enlisted the help of an additional lead vocalist in much of their studio work (Bens Jaeger sang lead on their debut, but departed the group as soon as recording was completed). That same year, the live album Open Fire: Live in Basel 1972 hit stores, taking advantage of the band's constant and successful touring. Tomorrow Blue followed shortly after, appearing in 1973, and the band released Dreams early in 1974. A few live albums, compilations, and studio works continued to trickle out during the rest of the '70s and early '80s, with the core Toad lineup still firmly in place. By the early 2000s, interest in the early European hard rock scene in general (and Toad in particular) led to a slew of deluxe CD reissues and collections -- the best of which were to be found on the Italian imprint Akarma.". (J. Scott McClintock, All Music Guide)
Posted by Zen Archer at 10:28:00 PM