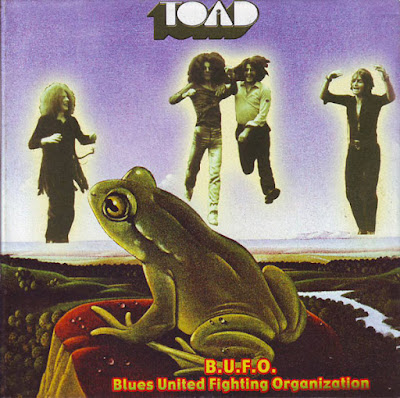 B.U.F.O.-Blues United Fighting Organization, was an ultra rare acetate recorded by the Swiss based blues-rock band Toad in 1970. They were one of the better European bands that played blues based rock along the lines of Cream and similar bands.
I was so pleased to hear this music, and pleasantly surprised with the quality of sound and musicianship, considering that it never saw the light of day prior to this year. Let me restate that, I am shocked after listening to this great blues-rock that it was not released until now. Incredibly so, this was a trio that made up the first incarnation of Toad with Vic Vergeat (Guitar, Vocals), Werner Froelich (Bass, Vocals) and Benj Jager (Vocals).
Jager sounded like Rod Stewart when he was with the Faces and the music actually has some similarities as well. Vergeat pumps out some of his best studio licks that I have ever heard from that era, playing some stinging and biting guitar that set up the vocals beautifully. He cuts loose on Dave Mason’s "Feelin’ Alright," and longer stretches such as the album closer "Lone Wolf Rocks," showing why he was and still is one of the most underrated axe wielders in the history of recorded music.
Posted by Zen Archer at 9:51:00 PM