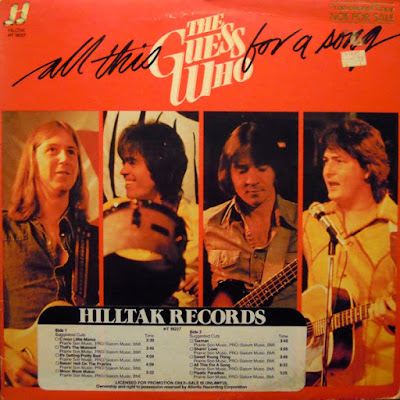 
Doug Yule had no right to put the Velvet Underground name on the U.K. album Squeeze; half of Creedence Clearwater Revival and a fifth of the Cars is not Creedence or the Cars. Veteran bassist Jim Kale certainly has paid his dues. But 1971's Brave Belt with Chad Allen and Randy Bachman had more of a right to use the name than Kale and Don McDougal, McDougal having joined the band in 1972 when Kale left! That being said, how does this album rate on its own? Well, Burton Cummings and Randy Bachman wrote the hits, and sustained a career beyond the Guess Who. Live, this band was a competent cover act (with even more changing faces), but tunes like "C'Mon Little Mama," "Raising Hell on the Prairies," "It's Getting Pretty Bad," even a melody like "That's the Moment," they simply miss the mark. This is a great example of how important the creative force of a star, an egomaniac with great ideas and tons of attitude, is to the construction of important art. This is as much the Guess Who as a bottle of cola is a box of Cheerios. And when you go to the supermarket to buy Cheerios you expect to get what you want. If you splashed All This for a Song, new album by one of the guitarists for the Guess Who and their original bass player, you would get high marks for accuracy. Kurt Winter, one of Randy Bachman's replacements, co-wrote three tunes with McDougal, Kale, and drummer Vance Masters, one being the title track "All This for a Song," but it is more like "All the kings horses, didn't the Kingsmen go through this?" In June of 1983, Garry Peterson, Jim Kale, Burton Cummings, and Randy Bachman recorded, with producer Jack Richardson, an album called Reunion which was sold on TV. There are touching liner notes by Bachman, who performs on tunes made famous by his replacements. Now that is legitimate Guess Who music. This is a tough listen, important only because it documents a couple of members of a band in flux.
Posted by Zen Archer at 11:03:00 PM