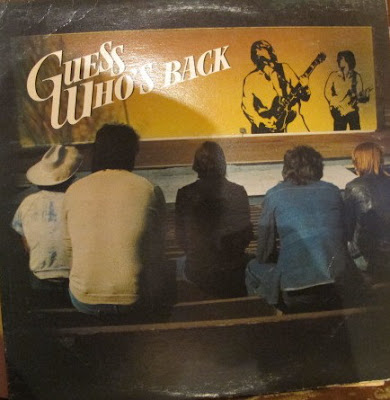 This 1978 album features neither the "definitive" Burton Cummings-era Guess Who nor the group of hacks that original member Jim Kale (who trademarked the band name, I believe) kept out on the county fair circuit for a number of years after the first band folded in the mid-Seventies. Instead we get Kale aided by the interstellar Kurt Winter, who made most of the post-Randy Bachman Guess Who albums soar with his great lead guitaring and his equally great songwriting, and by second guitar Donnie McDougall, who was with the Guess Who with Winter in the early Seventies. They're joined by drummer Vance Masters, who was previously with Winter in Brother, an early Seventies power trio from the Guess Who's stomping grounds in Winnipeg, and Rob Ingles as a third guitarist. And whaddya know? This album is actually pretty good! Nothing on here is as memorable as the singles Cummings, Bachman and Winter got on the radio, but this album does feature Winter's more idiosyncratic songs, reminiscent of earlier Guess Who albums like SO LONG BANNETYNE and ARTIFICIAL PARADISE, all punctuated by his stinging lead work. McDougall handles the lead vocals and sounds enough like Cummings himself to makle you do a double-take. There's nothing on here that would make anyone who loved the original band's albums cringe with loathing----it's just that this sounds more like a ZZ Top or Jo Jo Gunne album than a Guess Who album. Good ol' boogie, in other words. Emphasis on good.
Posted by Zen Archer at 11:00:00 PM