The Guess Who
1975
Power In The Music 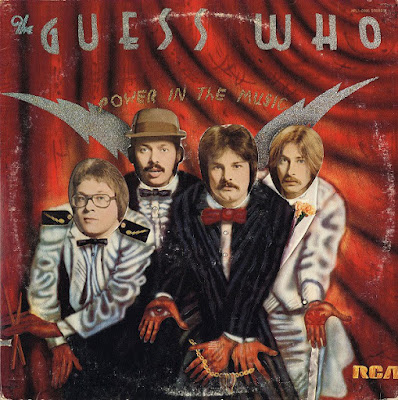 When Burton Cummings was looking to change the sound of the Guess Who, he partnered up with Domenic Troiano for 1974's Flavours and this 1975 conclusion to this phase of the group, Power in the Music. Self-indulgence pervades the proceedings, with Cummings rewriting history. "When the Band Was Singing (Shakin' All Over)" is a perfect example of a song that could have but doesn't. Gone are the magic guitar lines of "Share the Land" and the intensity of "These Eyes." Jack Richardson's production along with engineer Brian Christian's pristine sound set the table, but Cummings and Troiano give the world appetizers instead of a main course. Richardson and drummer Garry Peterson are the only holdovers here with Cummings; latter-day bassist Bill Wallace is not allowed to contribute to the songwriting, though he provided input on six of the ten titles found on 1973's Artificial Paradise, the same number as frontman Cummings on that disc. "Dreams" is brilliant, though, an anomaly, the classic Cummings/Guess Who voice coming back for a great reprise. It's just too bad he couldn't deliver ten of these per album, put his heart and soul into it, and keep in mind the thing that made the Guess Who so radio-friendly. "Rich World -- Poor World" descends into the new dimension of what should have been called "The Burton Cummings/Domenic Troiano Project." Little jazz flavors make this about as much the Guess Who as Jim Kale and Garry Peterson's 1995 album Lonely One. Recorded in March of 1975 at Toronto's Sound Stage, the music on "Rich World -- Poor World" starts surfacing as something that could be salvaged into a new Guess Who hit, but Cummings goes into a Frank Zappa satire. Their last hit, "Dancin' Fool" from 1974's Flavours, had more in common with Zappa than "American Woman," and therein lies the problem. It's something that did not go unnoticed by Zappa; he released his own "Dancin' Fool" on 1979's Sheik Yerbouti album. The frustrating thing here, though, is that Domenic Troiano, the guest guitarist from Randy Bachman's 1970 Axe LP, on this second musical partnership with Bachman's ex-comrade, is way too experimental to be considered true Guess Who. The highs of "Shopping Bag Lady," including guitars straight from Joe Cocker's "With a Little Help From My Friends," get lost in the translation, while the brilliance of "Coors for Sunday" feels out of place on an album by four dudes calling themselves the Guess Who. "Coors for Sunday" sounds like Burton Cummings was listening to Lou Reed's Sally Can't Dance and Coney Island Baby albums. Heck, they were also on RCA and the rhythm section to Reed's Rock 'n' Roll Animal band were part of a Troiano ensemble, so the styles are not as disparate as one would think. The title track veers off into high experimentation, while songs like "Down and out Woman," "Roseanne," and "Women" are all so very sexist. The focus of "Undun," "Hand Me Down World," and even minor FM hits like "Glamour Boy," "Broken," and "Guns, Guns, Guns" are traded in for music that, while interesting, is way off course. The highly influential band who Aerosmith and Zappa may have found to be a guilty pleasure doesn't conclude with a thud here, just confusion and an asterisk: "to be continued."