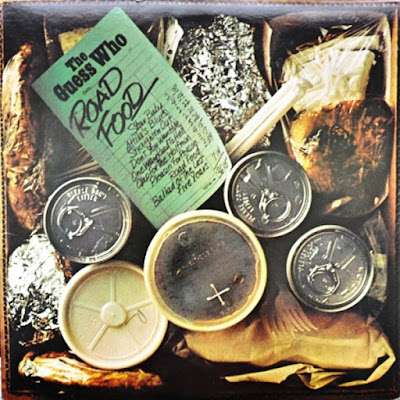 Dismissed by snobbish critics as a clockwork singles machine, the Guess Who have continued selling albums and filling concert halls even after the hits stopped coming. They are part of no trend: As Canadians who chose to remain distant from both American and British rock cultures, they hover perpetually on the sidelines, continuing to evolve a unique brand of rock, admirably represented on their 11th RCA album, Road Food.
Road Food is filled with leader/singer Burton Cummings's intriguing variety of musical styles and bizarre lyrics. It is also thankfully free of filler. The music ranges from the blithe pop sound of the title track and "Star Baby" to the light jazz feel of "Straighten Out." Many songs evoke the pop/R&B styles of the Fifties and early Sixties, notably "Don't You Want Me" (with its Shirley & Lee piano), "Pleasin' For Reason," and the amusing "Clap for the Wolfman," a potential single with cameo interjections from the legend himself. The antique flavorings are subtle: The ambience is contemporary, with skillfull playing, smooth harmonies and Cummings' nonpareil vocals.

Lyrically Cummings mixes distorted snatches of classic rock & roll songs, sardonic commentary on the travails of touring, and tantalizing, if meaningless, images. "Hurricane wonder boy scratchin' for the scrunge now" or "Well, have you ever seen a Madras monkey/ Have you ever seen an Orlon eel?" reach the heights of whimisical absurdity, but "Don't You Want Me?" (redone from a previous LP) is a ridiculously exaggerated and bloodthirsty jealousy number.

The murky images come together in "Ballad of the Last Five Years," a moody, melodic blues higly reminiscent of Van Morrison's Astral Weeks monoliths: It's a haunting climax for a first-class album from one of rock's most consistently fascinating maverick bands.