The Guess Who
1973
Artifical Paradise 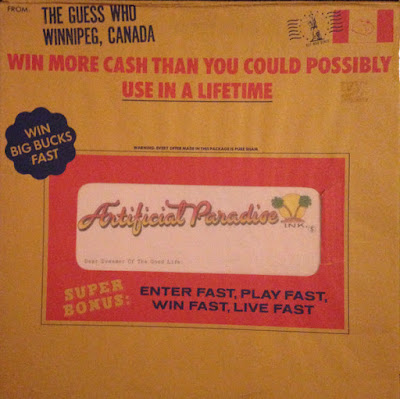 
Artificial Paradise may be the most consistent album project by the post-Randy Bachman Guess Who, a solid offering of strong melodies, superb production, and focused artistic vision. It is also one of the group's more obscure offerings; a small fortune was obviously spent on the gratuitous and excessive packaging which says absolutely nothing and probably did much to sink this fine effort. Surprisingly, Burton Cummings only writes two titles on his own, contributing to four others by his current bandmates. Winter, Wallace, and McDougal actually get a freer songwriting reign on this ten-track release and it harkens back to the initial success of the Share the Land album, the first project where the new members explored, blending their musical skills. The beauty of Don McDougal's "Samantha's Living Room" or the "Iko Iko"-inspired "Follow Your Daughter Home," like everything else here, is clouded by the cover art, if it can even be called that. A typical Ed McMahon get-rich-quick sweepstakes advertisement takes up the inner sleeve, the glitzy color insert and the letter from "Marty Slick" (a dig at Grace Balin, one wonders, of labelmates Jefferson Starship?), which features the lyrics on the flip of the sweepstakes letter. The album cover is a big brown paper envelope with Guess Who/Winnipeg, Canada, as the return address. Beyond the packaging, though, the other dilemma is that this FM-oriented project holds onto the sensibilities of the band's AM hits. No matter how you slice it, they were not hip in America at this point in time. Decades later the music is very persuasive, but for 1972 how could the Guess Who compete with the Velvet Underground, the Grateful Dead, Moby Grape, or even Vanilla Fudge for counterculture cool? As with Bachman-Turner Overdrive, they couldn't, with the aura of the mainstream following the group as it did Bachman-Turner Overdrive. Despite the image problem with the band and the album cover, every track here excels and is first-rate; the lengthy jam that is Cummings' "Those Show Biz Shoes" is more fun than his similar song, "Your Nashville Sneakers," from the album Rockin'. "Orly" and "Follow Your Daughter Home" made it onto The Best of the Guess Who, Vol. 2, which itself was full of songs that, though good, failed to match the majesty of the hits on volume one. Artificial Paradise is the album in between Live at the Paramount and #10, a time when the band was attempting to cross over to the FM dial. As good an effort as it is, they should've stuck with their major strength: keeping their hand in the Top 40 game.
Posted by Zen Archer at 10:43:00 PM