The Guess Who
1971
So Long Bannatyne 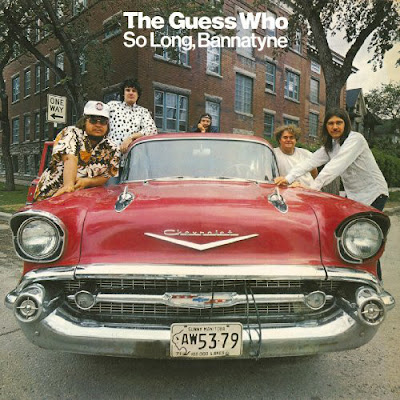 Produced by Jack Richardson, So Long, Bannatyne was recorded by the Guess Who in a two-week stint in June of 1971. With guitarists Kurt Winter and Greg Leskiw on board, the album opened well with “Rain Dance” and the perceptive “She Might Have Been a Nice Girl,” but then fell into a kind of disjointed, dispirited, and rather exhausted-sounding mishmash of underdeveloped songs. . The album was reissued in the digital era with the March 1971 single “Albert Flasher” b/w “Broken” included as bonus tracks, which lifted things considerably, allowing the sequence to end as strongly as it begins. In retrospect, So Long, Bannatyne wasn’t a disaster, but it didn’t move the band forward either, and it still seems, all these years later, like an underrealized release that’s short on memorable songs.
Posted by Zen Archer at 4:27:00 PM